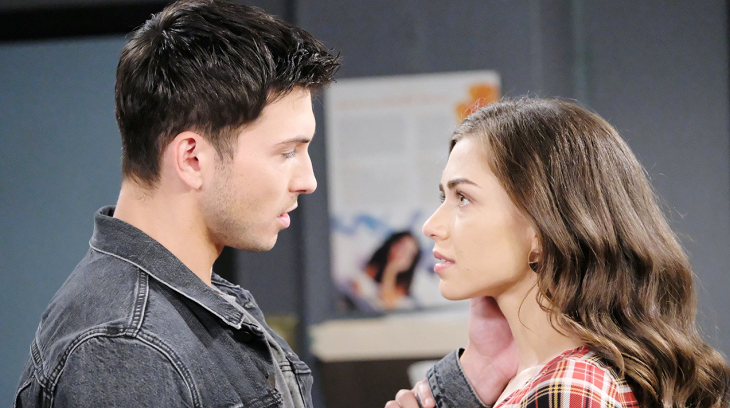 Days of Our Lives (DOOL) spoilers tease that Ciara Brady (Victoria Konefal) and Ben Weston (Robert Scott Wilson) will soon take their relationship to the next level. It’s been a long road for these two, and they’ve just been through a big ordeal, with Ciara getting kidnapped by a cartel member. Of course, Ben was the hero and rescued Ciara from the situation, which further bonded the couple.

Even Hope Hernandez (Kristian Alfonso) was grateful toward Ben for finding Ciara and keeping her safe. Ben rushed into the hotel where Ciara was being held captive, rather than wait for the SWAT team to infiltrate the hotel, and it turns out that he made the right move. And Hope couldn’t help but notice how Ciara and Ben clung to each other after the ordeal was over.

It looks like the whole experience will bring Ben and Ciara even closer together. The two had been getting closer, and almost made love when they were interrupted by DiMera security business. But DOOL spoilers say that Ben and Ciara will soon get another chance to express their love, and this time they won’t be interrupted.

According to Days of Our Lives spoilers, the couple will get cozy at Ben’s place, and finally, the time will be right. Finally, “Cin” will make love. But it won’t be long before Hope finds out that Ben and Ciara took the next step in their relationship. How Hope finds out remains to be seen, but she’ll definitely notice that something is different between the couple.

Of course, Hope has never liked Ciara and Ben being together, given Ben’s past as the Necktie Killer. She has been hoping that the relationship would run its course, and she was particularly glad when Ben broke up with Ciara earlier this year. She wasn’t happy that her daughter was in pain, but she was satisfied that the pair had split up.

Days of Our Lives spoilers say that Hope will have to confront the fact that Ben and Ciara have taken their relationship to the next level, and she’ll have to face a startling realization: that Ciara’s in love with Ben. Of course, Ben and Ciara haven’t yet said the “L” word, but it looks like that’s soon coming.

One thing’s for sure: Hope will have to deal with these new changes in Ciara’s life. Ciara’s a grown woman, so Hope will need to accept her choices, even if she doesn’t like them. Do you think that Hope will ever be able to fully accept Ben in Ciara’s life?

Days Of Our Lives Spoilers: Nicole’s Return Shocks Eric– Shows Up At His Front Door