Days Of Our Lives Spoilers: Maggie And Kate Clash Over Titian– Victor Is In The Middle 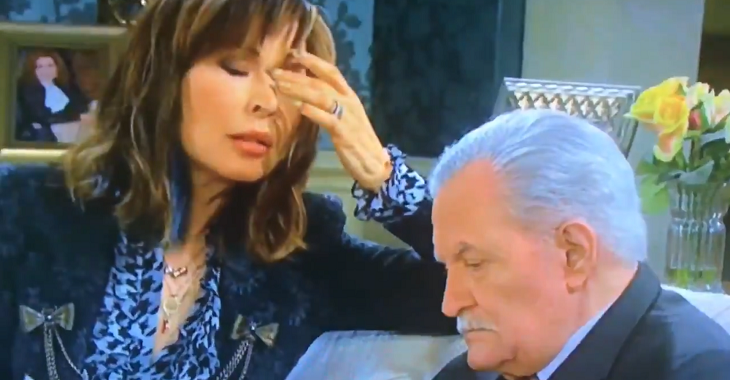 Kate and Maggie don’t have the best history with each other, although most of the conflict was indirect and having to do with spouses and other loved ones. Longtime Days of Our Lives viewers will recall that Kate has endangered Titan at least once in more recent history, plus tried to kill Victor with a fire poker in 2002, and wound up setting the Kiriakis mansion on fire, and now Kate’s son Rex Brady (Kyle Lowder) and Maggie’s daughter Sarah (Linsey Godfrey) are engaged to be married! Maggie has a couple of reasons to be upset about Kate returning to Titan, and not to trust her!

As far as Brady, he has a not so enamoring history with Kate as well. For one thing, she had his son with Theresa Donovan (Jen Lilley) Tate (played by several sets of twins, Peter and Thomas, Matthew and Nathan Scott, Jacob and Wyatt Walker) in 2016 kidnapped, and forced his beloved Chloe Lane (Nadia Bjorlin) into prostitution through a thug!

I am living for grouchy Thanksgiving Victor. #DAYS #DOOL pic.twitter.com/7lDP0LeNNZ

Days Of Our Lives Spoilers– Will Maggie And Kate Bury The Hatchet?

Kate being re-hired at Titan means that she will be around the Kiriakis mansion a lot more since neither Brady nor Victor seem to have an office outside of the mansion; now, whether she will try to resuscitate any of her own companies, such as Countess Wilhemina Cosmetics, remains to be seen.

It also remains to be seen whether she will work inside or outside the mansion, since Maggie will be sure to have something to say to Victor about Kate’s return, and it probably won’t be pretty!

Days Of Our Lives Spoilers: Hope Learns Lani Spent The Night With Rafe– Will She Assume They Slept Together?

Stay tuned to Days of Our Lives and keep checking DOOL spoilers frequently for all the latest news, updates and spoilers!