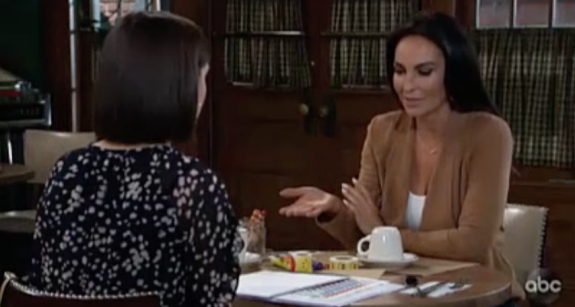 Welcome to your Tuesday, April 23 General Hospital recap! We begin our day at the intervention for Kristina Davis (Lex Ainsworth) where Michael Corinthos (Chad Duell) is trying to convince her to come home with him. Alexis Davis (Nancy Lee Grahn) and Sonny Corinthos (Maurice Bernard) wonder if Shiloh Archer (Coby Ryan McLaughlin) is holding something over her head.

At the Dawn of Day house, Sam McCall (Kelly Monaco) says she wants to prove her faithfulness and commitment to him. Willow Tate (Katelyn MacMullen) is at Kelly’s Diner when Hamilton Chase (Josh Swickard) enters with Valerie (Paulina Bugmbe) – who is now playing that role.

Willow Tate asks Chase to sit while Valerie goes to order the food. He asks what she has been up, he missed her the night before. As Valerie sits at the counter, Willow explains that a friend is in trouble and she needs to help her. Valerie comes over and formally meets Willow, then heads out to the car.

Chase and Valerie decide to swing by the Dawn of Day house. Tj and Molly approach and explains that Kristina has now left DOD. Valerie asks if she can give her a call and see if she’s okay. At Kelly’s, Harmony has met up with Willow and they are catching up.

GH Spoilers state that Curtis meets up with Jordan Ashford (Brianne Nicole Henry) after her latest treatment. They discuss the stolen Canadian drugs and Ryan’s severed hand. TJ and Molly took Jordan’s medical records and discover she is keeping a secret.

Ava Jerome (Maura West) says she going to use his severed hand to “bury him”. She believes he is alive and waiting for the right moment to strike. Kevin says that an ambush would be very dangerous and not the way to go. Ava reminds him that the police have stopped their investigation. She thinks creating a trap – a funeral – would be a good way to get Ryan back to town.

Ava asks Kevin to be her fake boyfriend in order to trick Ryan out of hiding. Kevin says that Ryan will have no problem murdering her if he has the chance. Ava says he has nothing to lose by helping her.

Kristina isn't feeling great about her family's therapy session with Neil. How long will it take to break through Shiloh's programming?
A tense, new #GH starts RIGHT NOW on ABC! @_lexiainsworth pic.twitter.com/VyIsX3xGPZ

At the Floating Rib, Felicia Jones (Kristina Wagner) has invited Laura Webber (Genie Francis) over to discuss the Ryan Chamberlain (Jon Lindstrom) plan. Felicia says she owes Laura an apology for agreeing with Ava Jerome (Maura West) about the plan to trap Ryan. Laura says she can’t live in fear of Ryan forever.

GH Spoilers– Sam And Shiloh Talk About Her Next Steps

Shiloh says that she is almost ready for the circle of trust. Right at that moment, Harmony enters the room and wonders if she is interrupting something. He explains that they are discussing the membership to the trust and that her path is long and winding. Harmony says she is nervous about the next steps she is taking and Shiloh calms her fears.

At the safehouse, Kristina Davis (Lexi Ainsworth) is talking to Dr. Neil (Joe Flanigan), Sonny, and Alexis about Dawn of Day. She says that DOD sees her for who she is and that her family does not. She says she was lost before finding Dawn of Day.

Dr. Neil asks if she is happy being out of DoD. She thinks she is happier now than ever and will be happy long-term teaching Shiloh’s lessons to others. Alexis brings up the dancing that she used to enjoy and what about business school? Kristina says she is fulfilled and needs nothing else outside of DOD

Harmony is trying to convince Willow to come back to DOD and be a teacher. Kristina continues to scream and say she will have them arrested for kidnapping. They leave outside and she attempts to call Valerie.

Ava and Felicia discuss the plan to catch Ryan and how they need Kevin’s help. TJ sees Jordan at the hospital and says that she needs to be honest with him. Shiloh is wondering if Sam is ready for the next “step” as he takes his shirt off. He asks Sam to reveal herself to him as she starts to take her shirt off….flash to preview