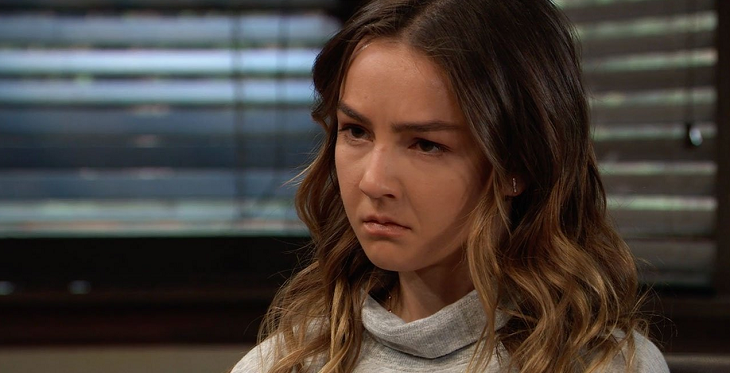 General Hospital (GH) spoilers for Wednesday, April 24 tease that it will be another exciting day of drama for the fans as Ava Jerome (Maura West) meets with Curtis Ashford (Donnell Turner) and her brother Julian Jerome (William DeVry). Ava says “Ryan Chamberlain (Jon Lindstrom) is dead.”

As General Hospital viewers know, Ava does NOT believe Ryan is dead; she is probably saying that so Julian will call off Curtis and any other bodyguard or bodyguards he would have hired in Curtis’ place since Curtis will be tracking down leads on Ryan in Canada.

Elsewhere, Kevin Collins (Jon Lindstrom) makes a call to someone and tells his wife, Laura Collins (Genie Francis) “We’re in”. Could that be referring to playing boyfriend for Ava’s plan to draw Ryan back?

Willow Tait (Katelyn MacMullen) is upset with Harmony Miller (Inga Cadranel) who tracked her down and tried to get her to come back to Dawn of Day in Tuesday’s episode. General Hospital viewers found out that Harmony is either Willow’s mother or adoptive mother, regardless, the only mother Willow has ever known. She tells Harmony since she was supposed to protect Willow and instead gave her to Shiloh Archer (Coby Ryan McLaughlin), that Harmony is nothing to her now!

Meanwhile, Detective Harrison Chase (Josh Swickard) is upset with Michael. Detective Chase is undoubtedly talking about the exit plan for his sister Kristina from Dawn of Day, where Jason Morgan (Steve Burton) took her from the initiation room. He warns Michael that he gave Shiloh a weapon, likely a weapon involving kidnapping charges!

At the Dawn of Day house, a shirtless Shiloh has brought Sam McCall (Kelly Monaco) into the initiation room in the attic where he appears to be preparing to have sex with her, and tells her, “I think we’re ready to take this to the next level!”

It doesn’t look like Sam is going to refuse since she apparently turned the recorder on her cell phone on in Tuesday’s episode. Is she going to try to set Shiloh up for rape? Elsewhere, Sonny gives the word to Jason, as he says he’s done with this and to eliminate him; meaning Shiloh!