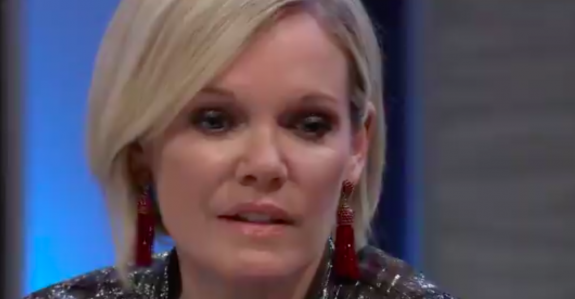 Ava Jerome (Maura West) takes a phone call and its Kevin Collins (Jon Lindstrom) saying they accept her offer. Ava meets with them and they laid out the plan of how this will all go down. Laura and Kevin will pretend to break up in public. Laura and Ava talk separately where she warns her that she better not try any funny business with Kevin during this charade.

At General Hospital, TJ Ashford (Tajh Bellow) confronts his mother Jordan Ashford (Brianne Nicole Henry) and says he knows about her test results. They need to have an honest conversation about what is happening to her. Jordan says her remaining kidney is near-failure and she knows she may die.

At Kelly’s, Willow Tait (Katelyn MacMullen) screams at Harmony (Inga Cadranel) that she’s her mother and she practically gave her away to Shiloh Archer (Coby Ryan McLaughlin). Harmony says that she’s the only friend she has and she kept the pregnancy a secret from Dawn of Day. Harmony says that Shiloh had them canvassing the area looking for her and she would now like to meet her grandchild.

General Hospital Spoilers: Thursday, April 25, Liz Has A Chat With Cameron–Carly Gets Bad News–Ava And Kevin Put Their Plan In Action

Willow lies and says that she miscarried the baby. Harmony says this is sad for her as well, losing a grandson. Harmony says that Shiloh needs to know about the baby and she’s going to tell him. Willow cries that she pimped out her own daughter and storms out.

GH Spoilers: Sam Mccall And Shiloh Archer Get Closer At Dawn Of Day

At the Dawn of Day house in the secret attic room, Shiloh Archer (Coby Ryan McLaughlin) brings Sam Mccall (Kelly Monaco) into his lair. He has taken his shirt off and asks Sam to give herself to him. He says they must first engage in the physical before the spiritual.

As she takes her clothes off, someone starts knocking on the door – its Valerie. Valerie enters the house and starts to call out Kristina’s name. Shiloh and Sam ask Valerie what they can do for her, she says she’s looking for Kristina. Sam lies and says that she went out of town with friends.

At the Floating Rib, Hamilton Chase (Josh Swickard) is questioning Michael Corinthos (Chad Duell) about the whereabouts of his sister. Michael lies and says that Kristina Davis (Lexi Ainsworth) has left town for a while. Chase says that he knows his family took her. He hopes that she went off to the beach and was not kidnaped by his family.

At the metro court, Jason Morgan (Steve Burton) is asking Sonny Corinthos (Maurice Bernard) what is happening with Kristina’s progress. Sonny says she is almost completely brainwashed. Jason explains that Brick found narcotics on the cup that Shiloh used in the ritual. Sonny says we must “eliminate him.”

At the safehouse, Dr. Neil (Joe Flanigan) and Alexis Davis (Nancy Lee Grahn) are discussing the next steps to deal with Kristina. Inside the house, Kristina Davis (Lexi Ainsworth) is calling Valerie Spencer (Paulina Bugembe) who eventually answers. Kristina asks Valerie for help right as Alexis snatches the phone away.

Alexis says what the hell are you doing, Kristina threatens her and Dr. Neil that she will have them arrested for kidnapping. Alexis starts screaming that she better tell them who she just called, right now!
Dr. Neil relays to Alexis that he does not want to lose someone close to him to Dawn of Day.

"I am done with this. Eliminate him." #GH pic.twitter.com/wRuGEGTtgW

Sam meets up with Jason at the pier and says she’s not sure how long she can play this game with Shiloh. At DOD, Harmony relays that her conversation with Willow did not go well. After the plan is set, Kevin and Laura go home and make love.

Chase meets up with Valerie and they discuss what could have really happened to Kristina. Alexis cries that she wants her daughter back while hugging Dr. Neil, Kristina looks out from the darkness of the stairwell…….flash to preview