The Bold And The Beautiful Recap, Wednesday, April 24th: Quinn Wants Sally Out– Hope Urges Liam To Go To Paris–Thomas Continues To Manipulate 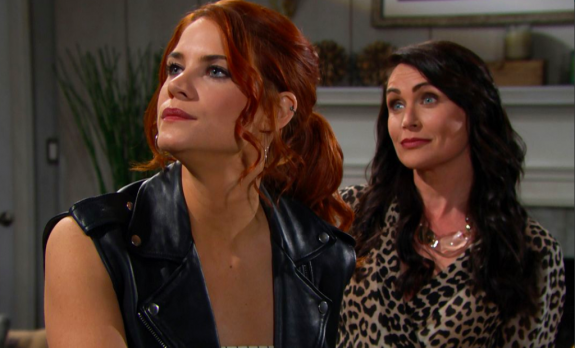 It all beings with Wyatt mentioning how difficult things have been for his brother Liam and Hope while the two of them discuss life matters at Spencer Publications. Liam admits that it has been hell, however, he says that Hope is open to starting a family one day again.

He then mentions that he does miss Steffy Forrester (Jacqueline MacInnes Wood) and the girls and that he calls them every day in Paris but it just isn’t the same. Wyatt suggests that he take a trip to Paris to visit them and assures him that he and Sally will check up on Hope in his absence.

Bold And The Beautiful Spoilers: Hope Logan Watches A Video Of Kelly

In the cabin, Hope watches a video of Kelly. She says that it’s heartbreaking that the little girl has to be so far away from her father. Thomas agrees. He thinks that Steffy’s girls need their father Liam around. Thomas asks Hope to keep quiet about the video and adds that her own son Douglas Forrester (Henry Joseph Samiri) has grown to love her. He also strongly suggests to Hope that she talks to Liam about spending some time in Paris.

Is Quinn right? Should Wyatt and Flo reunite? #BoldandBeautiful

Liam then arrives and makes the announcement that he’s going to Paris to be with Steffy and the girls. Thomas tells him that he’ll make sure to keep an eye on his wife while he is gone. Outside, Thomas smirks to himself, knowing all too well that his plan to erase Liam from the picture seems to be working.

Sally arrives at the beach house, but much to her surprise, Quinn is there waiting for her. Quinn thinks it’s time for Sally to make a move – out of the beach house. She mentions that when Sally was down on her luck, Wyatt helped her to get back on her feet again. But now that she’s doing well, Sally thinks it’s time that she moves to her own place.

B&B Spoilers: Quinn Forrester And Sally Spectra Get Into An Argument

Quinn also thinks that Sally is using her son for financial purposes. The two then get into a heated argument before Quinn calls Sally a con artist that used the Forresters in the past. Sally can’t believe that Quinn would attack her this way until she comes to the realization that Quinn is on a mission to kick Sally out just so Wyatt can be with Flo Fulton (Katrina Bowden).

Wyatt then arrives and after Sally tells him that Quinn is trying to kick her out, he goes nuts. He then kicks his own mother out and tells Sally not to worry and that she’s not going anywhere, anytime soon.