The Bold and the Beautiful Spoilers: Shauna Holds Zoe At Gunpoint After Fight With Flo Turns Physical 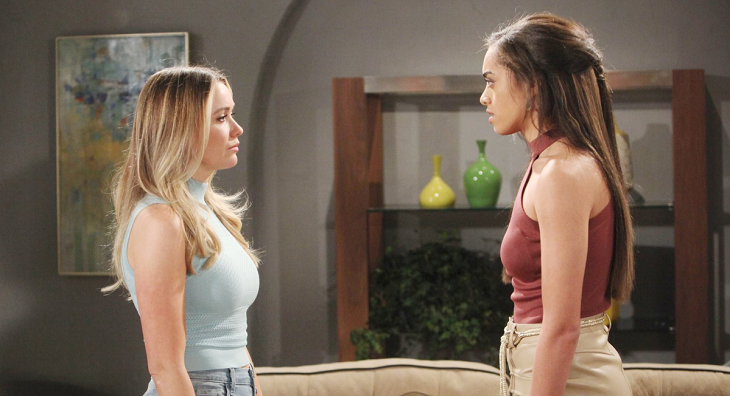 The Bold and the Beautiful (B&B) spoilers tease that things are really going to heat up for Zoe Buckingham (Kiara Barnes). She has been walking on pins and needles lately because of Florence “Flo” Fulton’s (Katrina Bowden) threat to tell Hope Spencer (Annika Noelle) that her daughter is alive.

Zoe has been struggling to keep Flo from spilling the beans about Phoebe Forrester (Isabella de Armas and Redford Prindiville) actually being Hope and Liam Spencer’s (Scott Clifton) baby. So far, Zoe has had success in keeping Flo quiet by reminding her that she’ll likely be held on criminal charges and go to prison if the truth comes out.

But Flo is feeling even more guilty about keeping the baby secret now that she knows she’s a Logan. She can’t stand to see Hope in so much pain and she’s nearly on the verge of telling the truth, just to relieve herself of all the guilt.

According to B&B spoilers, Zoe is going to reel when she learns the news that Flo is Hope’s newfound cousin. Zoe will probably see the writing on the wall and realize that Flo is going to be more tempted than ever to tell the truth about the baby swap. That’s not going to sit well with Zoe, and she’ll be more scared than ever about Flo’s state of mind and possible actions.

In fact, B&B spoilers indicate that Zoe and Flo will have a major altercation over Flo’s feelings and intentions. Although Flo’s mother Shauna Fulton (Denise Richards) thinks that Flo should just keep her mouth shut for now, it looks like Flo is still going to want to come clean. And that will lead to a big row between Zoe and Flo.

The two ladies will have a big argument at Flo’s apartment, and it will escalate to the point where it will get physical. Zoe and her dad have a lot to lose if the truth comes out…after all, they aren’t Logans like Flo is. Flo might be forgiven for her crime, but if the truth comes out then it’s virtually certain that Reese would be held accountable for his actions.

The Bold and the Beautiful spoilers say that their physical altercation will get so out of hand that Flo will end up on the floor and Shauna will end up intervening and ultimately holding Zoe at gunpoint to protect her daughter. It should be quite the scene, and Zoe will probably realize at this point that if Flo wants to spill the truth, then there’s not much she can do about it.

We’ll see what happens going forward with Flo’s conscience and how long she can go before she’s compelled to tell Hope the truth. Do you think Flo will be the one to finally reveal that Phoebe is really Hope and Liam’s child?