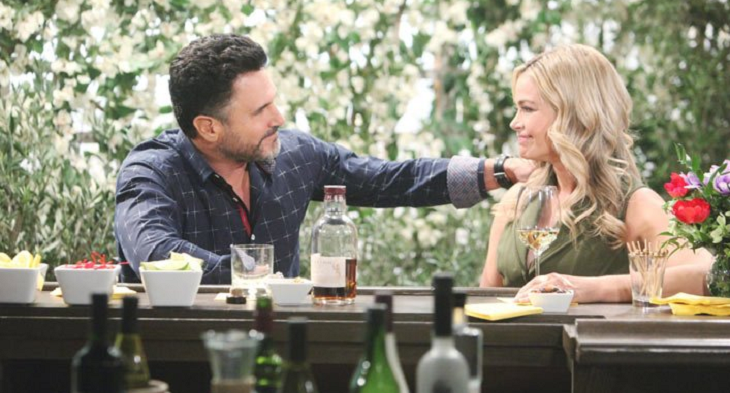 The Bold and the Beautiful spoilers for Thursday, April 25, tease that Bill Spencer (Don Diamont) will take a big hit. He and Katie Logan (Heather Tom) have been getting closer lately, and they’ve been the “victims” of Will Spencer’s (Finnegan George) matchmaking attempts in the recent past. They’ve also had Justin Barber (Aaron D. Spears) and Donna Logan (Jennifer Gareis) pushing them to reunite as well.

It seems that Bill will have given a possible reunion some thought, and on Thursday’s B&B episode he’ll make a big proposal to Katie. It looks like he’s going to formally propose that they give their relationship another try. He’ll probably make a good case for them to get back together, citing how good it would be for them, and for Will.

But according to B&B spoilers, Katie won’t be so receptive to the idea. She’ll likely respond with care and kindness, but she’ll ultimately decline Bill’s offer. Although her feelings for Bill have clearly been rekindled in recent months, she’ll probably be thinking about Will when she says no. She may worry that they could hurt Will if they get back together and it doesn’t work out.

Afterward, Bill will be feeling pretty hurt and rejected, and he’ll head to Il Giardino to clear his head and think. While there, he’ll bump into Shauna Fulton (Denise Richards), who will be dining alone. One thing will lead to another, and the two will chat and apparently enjoying each other’s company.

This will be a bit surprising, given that Shauna doesn’t have particularly fond memories of Bill from way back when. But the two will hit it off, and Bill may find a bit of comfort with Shauna.

Meanwhile, on the new episode of B&B on Thursday, April 25, Zoe Buckingham (Kiara Barnes) will get a shock. She’s been in England visiting her dad Reese Buckingham (Wayne Brady), and so she hasn’t been privy to recent developments in Florence “Flo” Fulton’s (Katrina Bowden) life. Specifically, she doesn’t know that Flo is a Logan.

According to B&B spoilers, Zoe will hear the news for the first time from Brooke Forrester (Katherine Kelly Lang), and she’ll be floored. Of course, Zoe’s first concern will be for the big secret that she and Flo are keeping from Hope Spencer (Annika Noelle). Zoe wants to make sure that Hope never finds out that she is “Phoebe Forrester’s” (Isabella de Armas and Rosalind Aune) mother.

Of course, once Zoe finds out that Flo is a Logan, she’ll immediately start to worry about Flo spilling the beans to Hope and the rest of the Logans. In fact, Zoe will be so startled that she won’t be able to hide her reaction from Brooke, and that will probably concern Brooke. But knowing Zoe, she’ll cover and offer some other excuse for her reaction.