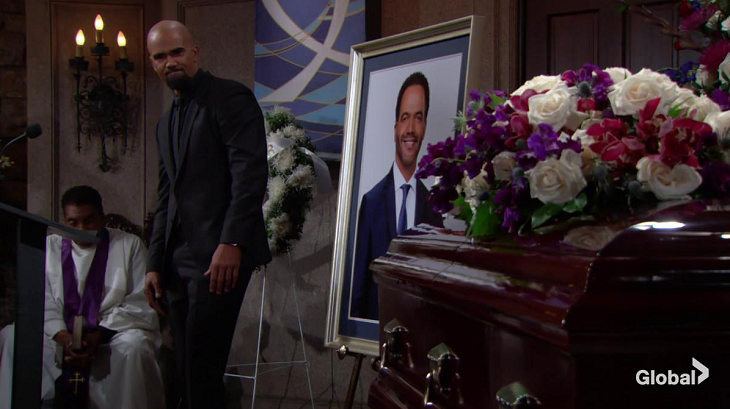 Meanwhile, at the Abbott estate, Jack Abbott (Peter Bergman) and Ashley Abbott (Eileen Davidson) will prepare to leave for the funeral. Jack will take a moment to gaze at his sobriety chip.

Finally, to wrap up the opening montage, Malcolm Winters (Shemar Moore) will arrive at Devon Hamilton’s (Bryton James) penthouse. Devon will answer the door and the men will share a somber look before hugging, while Nate Hastings (Sean Dominic) looks on.

Next on Y&R, people will arrive at the church. Devon and Lily will embrace, then Lily will fall into Malcolm’s arms. While Ana Hamilton (Loren Lott) sings, everyone will take their seats in the church. 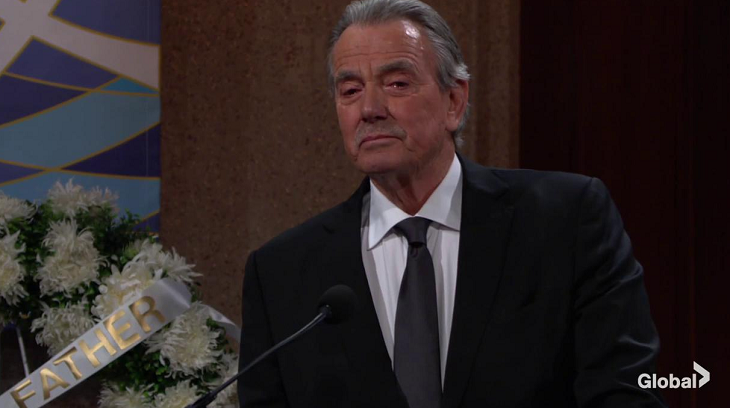 The service will begin, as the pastor (Stan Shaw) speaks about Neil and the sense of abandonment and confusion that accompanies a sudden death. He’ll state that Nell made Genoa City a better place, and that Neil was loved by his family. The camera will pan to Leslie Michaelson (Angell Conwell), Christine Williams (Lauralee Bell), Nick, Sharon, Mariah Copeland (Camryn Grimes), Devon, and Lily. All will be crying.

Next on Y&R, various people will speak about Neil. Lily will attempt to speak, but she’ll be unable to continue, so Malcolm will rise. He’ll touch Neil’s portrait and say that it is hard to do something that shouldn’t need to be done. He’ll have a tough time with his emotions during his speech, but he’ll talk about their difficult relationship and Neil’s talking sense to him when he needed it.

Malcolm will end by wishing he could tell his brother that he helped him become the man that he is, and he’ll say that he misses and loves Neil. He’ll say that he prays to God that Neil knew that he loved him.

Nate will speak, as well as Victor Newman (Eric Braeden), who will recall Neil working for him at Newman Enterprises when he was younger. He’ll remark on Neil’s honesty and integrity as he cries and states that he will miss Neil. Jack will speak as well and state that Neil saved his life.

Next on Y&R, Devon will speak. He’ll state that Neil was a wonderful father and also his best friend, even though Neil didn’t like him at first. But Neil never gave up on him, and that meant everything in the world to him. Devon will say that he doesn’t carry Neil’s DNA, but he’ll always have Neil’s voice in his head, and it will always be there.

Lily will still be unable to speak, so Malcolm will prompt Cane to speak, who will discuss how Neil believed in second chances. He’ll also state that Neil demonstrated for him what a father and child’s relationship should be. Finally, Lily will be able to speak, and through tears, she’ll convey how sad she is that her life is starting over without Neil in it.

Lily will state that Neil should have had more time on earth to laugh, and she’ll recall his laugh, his strength, and how he knew how to pull people back together. She’ll walk to the casket and tell Neil that she loves him.

Finally, on Thursday’s episode of Y&R, the pastor will return and wrap up the service. Devon will thank everyone for coming and loving Neil. The various people in attendance will chat and offer their well-wishes to each other. At the end of the episode, Lily and Devon will hold hands and gaze at the portrait of their father.