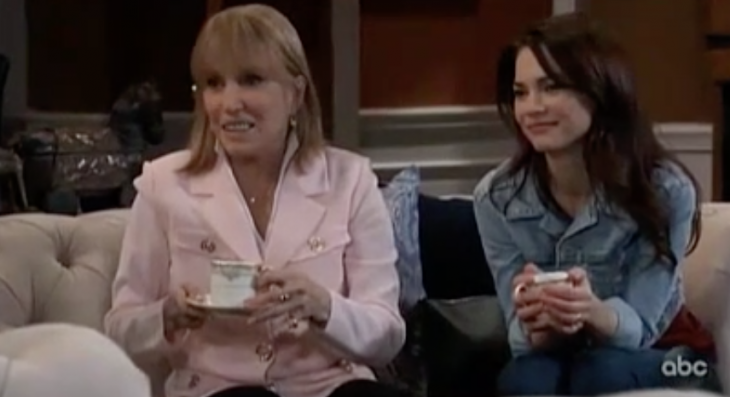 Welcome to your Thursday, April 25 General Hospital recap! We begin our day at Laura Webber’s (Genie Francis) house where she and Kevin Collins (Jon Lindstrom) are enjoying time on the couch after their night of lovemaking. Kevin says that he loves her as they both get up to leave.

At the Floating Rib, Ava Jerome (Maura West) asks Felicia Scorpio (Kristina Wagner) if they are ready to launch their plan. She says – we have one problem and its Mac Scorpio (John York.) At the Quartermaine Mansion, Oscar Nero (Garren Stitt) is playing his guitar while Josslyn Jacks (Eden Mccoy) sings.

At General Hospital Elizabeth Webber (Rebecca Herbst) asks Cameron Spencer (William Lipton) if he’s done with his community service. Elizabeth says they are having a tough time, but they will eventually get through this and he leaves. Epiphany (Sonya Eddy) comes over and ask how she is doing.

Elizabeth relays that Cameron is not warming up to Franco (Roger Howarth) the way the other kids do. Epiphany says the best thing to do is to give them time.

Anna tells him to stop and says that “he is right.” Anna explains that she found a bracelet from one of their missions. She realizes she never took the bracelet off, during conception or during her whole pregnancy. Robert says that for a smart woman, she is a basket case. Anna says that she is really afraid to be happy and Hamilton Finn (Michael Easton) makes her happy.

Finn shows up and joins them at the table. Anna updates him that she now knows for sure that Robin is her child.

Carly Corinthos (Laura Wright) arrives at the hospital and greets her mom Bobbie Spencer (Jaclyn Zeman). They are there to get the results of the latest pregnancy genetic testing. Carly is nervous and Bobbie questions where Sonny is. The doctor meets with Carly and Bobbie and lists a series of questions.

The doctor says that everything is coming up healthy in the tests. Carly asks the doctor how likely it will be her baby will have bipolar disorder. The doctor says it’s impossible to tell and she’s now ready to give the CBS test (genetic mutations).

Kevin agrees that the best way to draw Ryan out is to pretend to be in a relationship with Ava. Kevin says he feels terrible about what happened to Ava and the death of Kiki. Laura says she will be by his side no matter what.

Ava Jerome (Maura West) says to Mac (John York), why isn’t he afraid of Ryan Chamberlain coming back. Mac says that he does not want Felicia (Kristina Wagner) apart of a dangerous or deadly scheme. They agree they all have the same mission to stop Ryan somehow.

Kevin walks in and overhears them planning to murder Ryan. Ava says that she is going to make Ryan pay for what he did, no matter what she needs to do.

Inside the Quartermain mansion, Kim Nero (Tamara Braun), Drew (Billy Miller) and Monica Quartermaine (Leslie Charleson) are happy that Oscar is having a nap on the porch. Kim says she is so grateful for the gift that Josslyn has given Oscar in his final days.

Robert's still trying to convince Anna that Robin is her daughter (and not Alex's). Are they on the verge of a breakthrough?
Tune into an exciting, new #GH – STARTING NOW on ABC! @tristanrogers pic.twitter.com/khbrovJHR4

Kim relays to Monica that Oscar’s pain and condition is getting worse. Monica gets Scout and brings her out to play on the porch next to Oscar. Drew comes out to join them and Oscar starts making jokes about Scout hiking Kilimanjaro when she’s old enough. Kim comes outside to talk to Oscar, he wants to add the name Quartermaine to his name.

At the hospital, Josslyn runs into Cameron and they discuss the latest with Oscar. She gets mad at him for not being around for Oscar more.

Cameron arrives at the Quartermaine mansion and brings by cards so that they can all play poker.

Carly goes into have her genetic testing as Bobbie looks on fearful. Laura calls Lulu and leaves her a voicemail. Felicia, Mac, Ava, and Kevin all agree to start their plan in motion. At the Quartermaine mansion, they play poker while everyone looks at Oscar lovingly …….flash to preview