The Bold And The Beautiful Recap, Thursday, April 25: Zoe Fears Flo Will Tell The Logans Her Secret –Bill Pops The Question 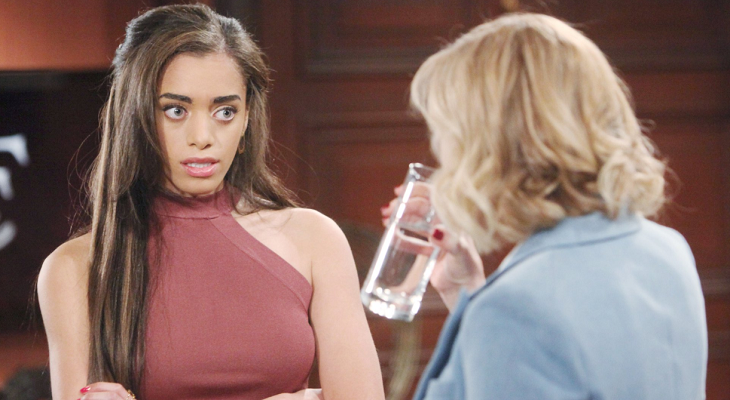 At Spencer Publications, Katie meets Don for a special meeting, but she has no idea what he has in store for her. Bill begins to talk about their son Will and how he really needs both a mother and a father with him at all times. Katie agrees with him.

Bill then makes a joke about how he’s a bachelor on several hands, although he’s not sure if he’s a “great catch.” Katie then talks about their long history and all of the ups and downs they’ve had. Katie even mentions their divorce but manages to make a lighthearted joke about it.

Bill then takes out an engagement ring and asks Katie Logan to be his wife – again. Bill says that despite their past, she can trust him with all of her heart. Katie is left stunned but after a moment tells him that he might not like the answer that she has for him.

The Bold And The Beautiful Spoilers: Friday, April 26 – Kate Sees Bill With Shauna – Zoe Pushes Flo To The Ground

At Forrester Creations, Brook Logan (Katherine Kelly Lang) recalls hope it was Zoe who first introduced Flo to Hope Logan (Annika Noelle). She then tells her the news that Flo is a Logan, as she found out that her biological father was Storm Logan.

Zoe is shocked. Brooke asks Zoe if she knows anything about Flo’s past. Zoe says that she’s worried that some people might be looking to take advantage of others, but Brooke doesn’t seem to be bothered about it. She mentions that all Hope needs right now is a friend and that Flo is perfect for her.

Flo has a tough decision to make. #BoldandBeautiful pic.twitter.com/vZJ987VNlD

At Flo’s apartment, Shauna can’t help but wonder what Brooke’s house might be worth. She then mentions that being a Logan will definitely change her life for the better. Flo asks why she and Storm never got together, but Shauna admits that it just wasn’t in the cards for her.

Shauna leaves before an angry Zoe arrives. She says that if the Logan family knew about the secret that she’s been harboring for months now, they will hate her. Flo thinks that they might forgive her, now knowing that she’s Storm’s daughter. Zoe doesn’t think so before she demands that Flo give her an answer on what she’s going to do next.