The Bold And The Beautiful Spoilers: Friday, April 26 – Kate Sees Bill With Shauna – Zoe Pushes Flo To The Ground 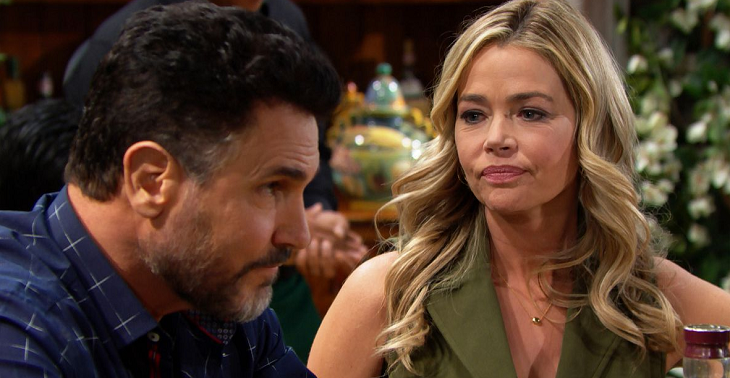 The Bold and the Beautiful (B&B) spoilers for Friday, April 26, tease that Katie Logan (Heather Tom) will be in for a surprise. She has just received a marriage proposal from Bill Spencer (Don Diamont), and the whole situation has got her shaken up. She definitely wasn’t expecting that from Bill, and she’ll commiserate with her sisters about the whole scene.

The Bold and the Beautiful spoilers say that Brooke Forrester (Katherine Kelly Lang) and Donna Logan (Jennifer Gareis) will counsel their sister and question her judgment in saying no to Bill. Of course, Donna, in particular, would like to see Bill and Katie back together, as she’s been urging Katie to renew her relationship with Bill for some time now.

According to B&B spoilers, Katie will be persuaded by her sisters to rethink her decision, and she’ll decide to go find Bill and tell him that she changed her mind. She’ll apparently find out that Bill is at Il Giardino and head there to track him down. But what she won’t know is that Bill has gone to the restaurant to drown his sorrows in scotch, and while there he found a friend…Shauna Fulton (Denise Richards).

Katie will arrive at Il Giardino and spot Bill with Shauna just as they’re cozying up and looking close. Of course, Bill’s not really interested in Shauna, but it will look to Katie like he certainly got over her rejection quickly. It should be a bad scene.

Meanwhile, on the new episode of B&B on Friday, April 26, Zoe Buckingham (Kiara Barnes) will explode in frustration and anger. She’s just arrived at Florence “Flo” Fulton’s (Katrina Bowden) apartment, upset because she found out from Brooke that Flo is a Logan.

Of course, Zoe immediately assumed that Flo was running yet another scam on Hope Spencer (Annika Noelle) and the Logan family. But she found out from Flo that Flo is indeed Storm Logan’s (William deVry) daughter and is thus forever tied to Hope as her cousin.

On Friday’s episode of B&B, expect to see a major argument between Flo and Zoe, as Flo once again threatens to tell Hope the truth that her daughter is actually “Phoebe Forrester” (Isabella de Armas and Rosalind Aune). Zoe’s going to be at the end of her rope, and she’ll decide that she’s had about enough of Flo’s nonsense.

Flo has a tough decision to make. #BoldandBeautiful pic.twitter.com/vZJ987VNlD

According to B&B spoilers, as the women argue, things will turn physical, and Flo will wind up on the floor. Then, Shauna will return from her visit with Bill at Il Giardino, and she’ll be forced to break up the altercation. Shauna will promptly pull out a gun and point it squarely at Zoe to end the fight.

Fortunately, B&B spoilers indicate that Shauna will bring some level-headedness to the situation, once she’s done welding her gun. She’ll sit Zoe and Flo down and insist that they form a secret pact to never tell the truth about Hope’s baby or Reese Buckingham’s (Wayne Brady) scam.

That should keep a lid on the baby swap secret for a while, but chances are that Flo’s conscience will continue to get the best of her and she’ll struggle to keep what she knows to herself, especially when she’s around Hope.