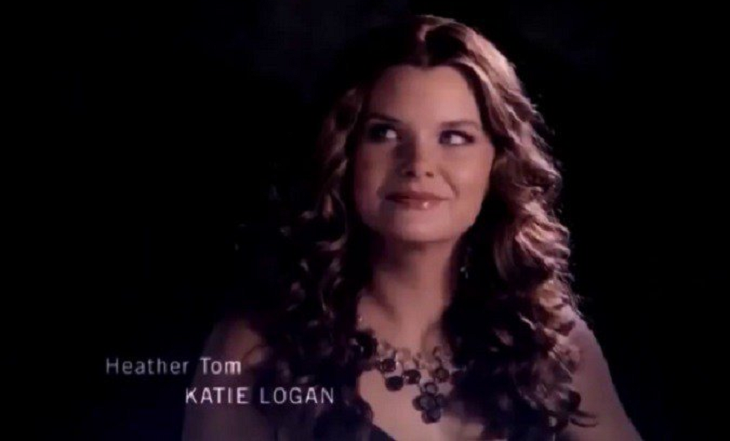 The Bold and The Beautiful star Heather Tom has a shot at winning her sixth Emmy award and become one of the most awarded actresses in soap opera history alongside “One Life to Live” star Erika Slezak.

Tom is a Daytime Emmy Darling and she’s been nominated for 18 times already and won five awards across different categories over the years. What did she submit as a sample performance reel, which the blue ribbon panels will review to determine the winner? The academy does not make public the reels submitted by the nominees. However, the press was given the chance to see the reels. Can Tom nab the Best Actress award this year?

Tom’s sample performance reel is 10 minutes and six seconds long. The clips were from her character’s (Katie Logan) custody battle with Bill Spencer Jr. (Don Diamont). One scene shows Katie informing Bill that she won’t settle for absentee parenting and that she’ll do everything to get full custody of their son.

The Bold And The Beautiful Spoilers: Sally Angered – Thomas And Quinn Treat Her Badly

Another scene shows Katie on the stand as she tells the judge that she didn’t want to take legal action but was forced to do so in order to protect her son. She also emphasized that Bill was supportive of her when she was still pregnant, given that her life was at stake. The reel ends with Katie winning the legal battle and coming to terms with Bill.

Although Tom’s reel showcased her talent and displayed how well she performed the scenes. Although the reel was emotional, it may not be dramatic enough for some Emmy voters. Furthermore, The Bold and the Beautiful only has three acting bids this year, which could mean that the soap, in general, wasn’t able to capture the attention of the academy.

Heather Tom is best known for her roles on The Young and the Restless as Victoria Newman, Kelly Cramer on One Life to Live, and Katie Logan on The Bold and the Beautiful. She won twice in the Daytime Emmy Awards for Outstanding Younger Actress in a Drama Series category in 1993 and 1999. In 1997, she won the Soap Opera Digest Award for Outstanding Younger Leading Actress.

@BethMaitlandDQB This pic is from right after Heather Tom debuted as Victoria Newman in 1990 this is one from one of her first interviews got it from an old SOD. pic.twitter.com/0vrUOVnRzP

She earned several other nominations from 1994 to 1998 and in 2000. She also appeared in All My Children, guest starred on Monk and Ugly Betty.