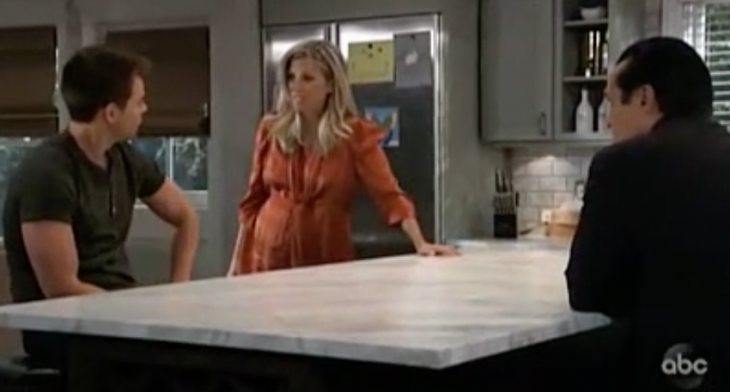 Welcome to your Friday, April 26 General Hospital recap! We begin our day at the Quartermain mansion where Josslyn Jacks (Eden Mccoy), Oscar Nero (Garren Stitt) and Cameron Webber9 Wiliam Lipton) are hanging out on the porch discussing his community service. Kim Nero (Tamara Brain) and Drew (Billy Miller) look out from the inside, happy he is spending time with friends.

At Kelly’s, Robert Scorpio (Tristan Rogers) and Hamilton Finn (Michael Easton) are catching up. Robert asks to see the ring that Finn is hiding in his hand. Anna Devan (Finola Hughes) walks out and joins them, she is on the phone with Robin Scorpio (Kimberley McCullough).

In the Crimson clothes department, Maxie Jones (Kirsten Storms) is looking for an outfit for her date while Nina Cassadine (Michelle Stafford) looks on. Sasha Gilmore (Sofia Mattson) arrives and is sneezing. Nina says that Sasha is sick and she really should go to bed. Nina relays that she is still pissed off about Peter and the DNA test. Sasha says that’s she needs to let go of her anger about it.

Maxie can’t figure out about what dress to wear while Nina relays that she is not a fan of this date with Peter August. She knows he will get close to baby James, who’s her nephew. Suddenly Nina realizes that Sasha is almost passed out and burning up sick.

Lulu Falconeri (Emme Rylan) arrives at the metro court and runs right into Peter August (Wes Ramsey) who is surprised to see her. He asks how her trip to Paris was and she asks what has she missed while gone. Lulu and Peter discuss the Ryan Chamberlain story and what needs to happen next. Lulu wants to do an interview with Ava Jerome. She thinks it’s a story that must be told, but Peter is worried if Lulu can handle it. 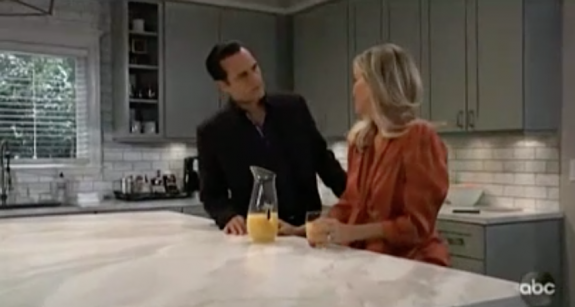 Lulu says she came back to Port Charles for her family that she loves, Peter says he has a hard time loving anyone. Lulu says that what he has with Maxie is special as Maxie approaches the table. Lulu leaves to let them have their date.

In Carly Corinthos’s (Laura Wright) kitchen she is having a glass of OJ when Sonny Corinthos (Maurice Bernard) enters the room. Sonny asks how the doctor appointment went at General Hospital. He is wondering when the CBS genetic tests will come back. Michael Corinthos (Chad Duell) enters the kitchen and he is sneezing as well. He is wondering what’s going on with his sister Kristina Davis (Lexi Ainsworth) and the intervention. Carly says that Kristina was taken advantage of by Shiloh, but that’s not Michael’s fault.

Carly says that Michael is burning up sick and he needs to go home and rest. Avery comes to the kitchen and overhears the baby conversation. They tell her that they are pregnant and she is very excited to be a big sister. 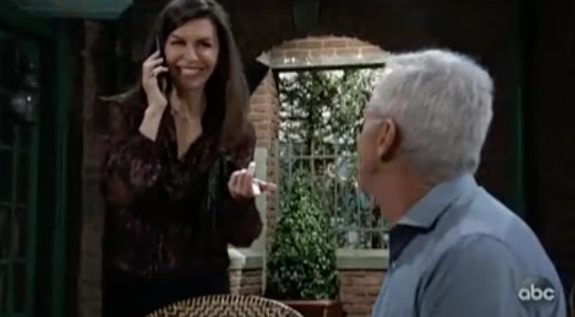 Kim (Tamara Braun) comes outside to the patio and thinks it’s a good time for Oscar (Garren Stitt) to come inside, she thinks it’s getting too chilly. All of a sudden Jason Morgan (Steve Burton) arrives and Oscar says he’s happy to see him. Oscar says he has an announcement, that he has added Quartermaine to his last name.

Julian Jerome (William DeVry) arrives at the mansion as well and runs right into Olivia Falconeri (Lisa Locicero). He says Monica Quartermain (Leslie Charleson) let him and please do not call security.
Oscar asks to speak to Jason Morgan (Steve Burton) alone. He wants to take a ride on his motorcycle which Kim protests and starts crying. Drew says he thinks the ride is a good idea and Josslyn agrees.

Anna Devane (Finola Hughes) tells Robin she has a bracelet for her that is a family memento. Robin has to go and Finn asks how she is doing. She sends her love to both Robert and Finn. Finn leaves to go to work and Robert still has the ring in his hand.

Finn is at the hospital when Nina arrives with Sasha and says that she’s very sick. 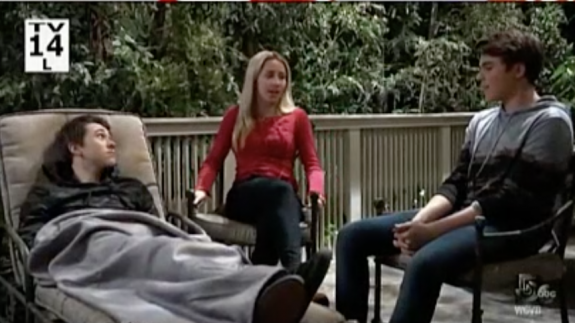 Oscar has his motorcycle ride and when he returns, he asks that Jason and Drew try to be better brothers. Carly and Sonny admit they are scared about the new baby but are willing to face whatever happens next. Sasha in her feverish state, says she wishes Nina was her real mother – right as Michael enters the room. Oscar asks Cameron to shoot a goodbye video for Josslyn, before he dies….flash to preview