General Hospital Spoilers: Jordan Collapses; Will A Kidney Be Found In Time To Save Her Life? 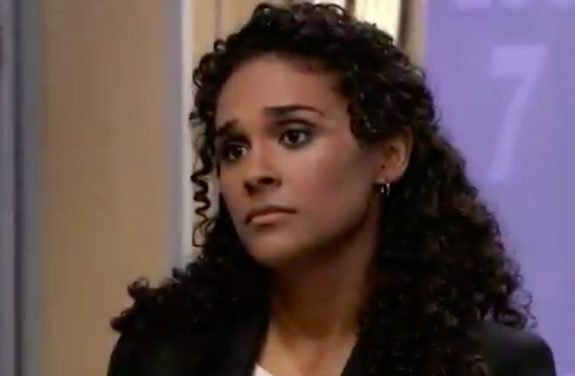 General Hospital spoilers tease that Commissioner Jordan Ashford’s (Briana Nicole Henry) time may be running out to find a donor kidney, as she collapses after returning from dialysis in a future episode of General Hospital! In a recent General Hospital promo, she was shown being warned by her son TJ Ashford (Tajh Bellow) that if her remaining kidney failed, she would die.

Then TJ copied her medical records out of the General Hospital patient record system and saw that her kidney function was decreasing. That is a sure sign that her remaining kidney is heading towards failure, and Jordan will need at least one new kidney to stay alive!

Many General Hospital viewers are assuming because of the spoilers timeframes, that Jordan will receive a lifesaving kidney transplant when Oscar Nero Quartermaine (Garren Lake Stitt) dies, but according to Soap Opera Digest May sweeps spoilers, that will likely not be the case. Perhaps Oscar’s cancer will have spread beyond his brain, or maybe he simply wouldn’t be a donor match. Regardless, GH spoilers say that Jordan will fight for her life waiting on a compatible kidney!

General Hospital Spoilers: Dialysis May Not Work Much Longer For Jordan Ashford

If Jordan’s remaining kidney does fail, dialysis may no longer work and her body could become poisoned from the waste products in her blood which the kidneys normally take care of. She could suffer massive fluid retention, shortness of breath, confusion, nausea, weakness, and irregular heartbeat; in addition, she could develop sepsis, which is blood poisoning. End stage renal failure is nearly always irreversible without a kidney transplant.

So far, everyone among Jordan’s family and friends have been tested and unfortunately did not prove to be donor matches for her, or the transplant would have already been done. It is a possibility, although no spoilers indicate it so far, that after Oscar is gone Drew Cain (Billy Miller) may offer to be tested to see if he can donate a kidney; it makes sense that he might be willing to since he ran into her when he had the blindness virus attack, and he may want to try to make up for it in some way.

Oscar has a request of Jason and gives his parents a scare in the process. Click to watch today's emotional, new #GH – RIGHT NOW: https://t.co/OjuhhobLJu

It’s probable that no one has kept Drew in the loop about Jordan’s health issues since he has plenty of his own to deal with. Stay tuned to General Hospital and keep checking General Hospital spoilers frequently for all the latest news, updates, developments and new spoilers!