‘The Bold and the Beautiful’ POLL: Will Liam Or Wyatt Lose His Relationship First? 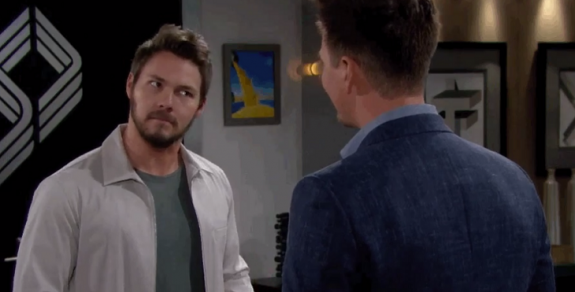 A double poll question is being asked about ‘The Bold and the Beautiful’ due to Liam Spencer (Scott Clifton) and Wyatt Spencer’s (Darin Brooks) precarious positions. Which sibling will lose his relationship first, assuming either, or both experience a cut.

B&B Spoilers: Hope Spencer and Sally Spectra Will Stay With The Men They Love

Hope Spencer (Annika Noelle) and Sally Spectra (Courtney Hope) are impressive people who have a lot to offer. Both Spencer men know that and have no current plans to walk away from the women they love.

‘Lope’ is married, where as ‘Wally’ is simply together. That alone would seem to make Liam and Hope’s bond more solid. But maybe not?

The Bold And The Beautiful Spoilers: Hope Moves In With Brooke and Ridge– Thomas’ Plan In Full Swing

Liam and Hope are poor souls who are often times too giving and generous to a fault. They allow their thoughts to center on others, which also enables the potential for manipulation. Now, based upon Thomas Forrester’s (Matthew Atkinson) selfish and hopefully, misguided plan, Liam is off to Paris, France, to visit Steffy Forrester (Jacqueline MacInnes Wood) and the girls.

Bold And The Beautiful Spoilers: Thomas Forrester Will Try To Interfere

In time, which is unpredictable in this soapy world, Hope and Liam will see Thomas’ plan for what it is. ”Lope’ doesn’t feel like it will suffer a quick break because of Liam and Hope’s current romantic reconnection. Yet, the atmosphere in Paris could make a reboot with Steffy possible.

And then there’s ‘Wally’. Thomas made it very clear that he was never in love with her when they were together, as Hope continues to shine most brightly in his mind. Liam used to be Sally’s preference, but that’s long since passed. As of the moment, Wyatt is the man she wants to be with.

Wyatt, on the other hand, told his mother that he’ll always care for Flo Fulton (Katrina Bowden). However, Sally is the one for him now.

Quinn Forrester (Rena Sofer) told Sally to beat it from her son’s life. She said no and Wyatt backed her up. But there is noticeable chemistry between the just-realized Miss Logan and her one-time high school sweetheart.

Fans of ‘The Bold and the Beautiful’ rightfully express their opinions on a regular basis. So, will Liam or Wyatt lose his relationship first? Please vote in our poll below!