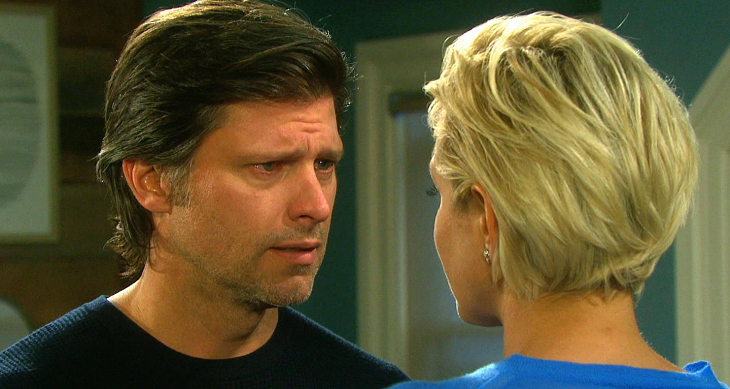 Days of Our Lives (DOOL) spoilers tease that Eric Brady’s (Greg Vaughan) reunion with Nicole Walker (Arianne Zucker), who mysteriously returned to Salem from the dead in Friday, April 26, will be cut short when they receive some very bad news concerning Nicole’s daughter Holly Jonas (Scarlett and Harlow Mallory)!

As Days of Our Lives viewers saw on Friday, a mysterious figure dressed in black made his way through secret passages in the DiMera mansion and got into little Holly Jonas’ (Scarlett and Harlow Mallory) bedroom while Ben Weston (Robert Scott Wilson) had a night off, and Stefan O. DiMera (Brandon Barash) and Chloe Lane (Nadia Bjorlin) were downstairs having an at-home date.

At the same time, Nicole turned up at the Brady apartment and was greeted by Rex Brady (Kyle Lowder), who called Eric to come home right away. Eric and Sarah were shocked to see Nicole, who had been presumed dead for several months!

Sarah and Rex then will go to the Kiriakis mansion to let Maggie Kiriakis (Suzanne Rogers) know that Nicole is alive. While they are there, Chloe will burst into the mansion with the terrible news that Holly has been apparently kidnapped and is missing.

Stefan will have his men, including Ben, looking for Holly, and someone will call the Salem Police Department and Commissioner Hope Brady (Kristian Alfonso) and Rafe Hernandez (Galen Gering) will join the search as well.

Other Days of Our Lives spoilers tease that after Sarah and Rex get the bad news from Chloe, Sarah will return to Eric’s apartment and deliver the horrible news to Eric and Nicole. Obviously, a joyous reunion will be cut short because they too, undoubtedly will be searching for Holly.

The search for Holly will last all week and possibly longer. Stay tuned to Days of Our Lives and keep checking DOOL spoilers frequently for all the latest news, updates, and developments! In the meantime, come back to Hollywood Hiccups for all the latest spoilers right here.