General Hospital Spoilers: Ava Receives A Suspicious Phone Call –Could It Be Ryan This Time? 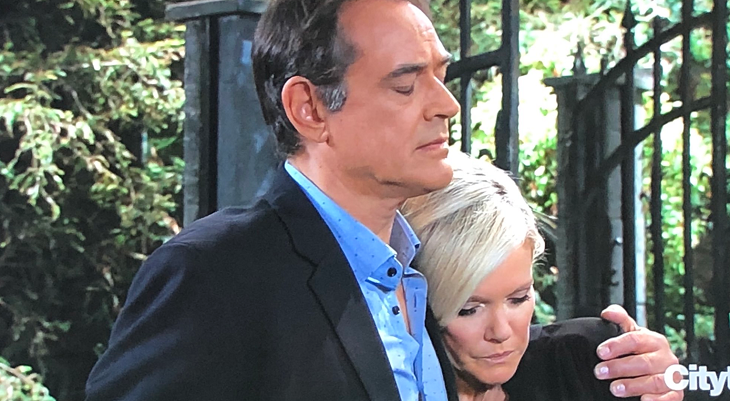 General Hospital (GH) spoilers tease that Ava Jerome (Maura West) will receive a suspicious phone call this week; could it really be Ryan Chamberlain (Jon Lindstrom) this time? General Hospital viewers will recall she got some calls with heavy breathing before that were traced by Curtis Ashford (Donnell Turner) and determined to be robocalls. They sounded more like crank calls, but maybe some robocall creator fell asleep at the wheel!!

Ava, along with Kevin Collins (Jon Lindstrom), Laura Collins (Genie Francis), and Mac and Felicia Scorpio (John J. York, Kristina Wagner) had staged a memorial service the day before, where they buried the hand. Laura dropped a bouquet of wilted white roses, probably one Ryan had given Ava, on the grave.

GH Spoilers– Ava And Kevin Being Their Plan

It’s reasonable to think that if they held a memorial for the hand and buried it, and they are together in a plan to lure Ryan back to Port Charles, perhaps they published an obituary as well! It would be easy to sneak a little gossipy looking phrase into the obituary such as, “the memorial service was attended by Chamberlain’s only living relative, Dr. Kevin Collins, with his date Ava Jerome, who once was engaged to the late serial killer”.

A little sick? Maybe – but no sicker than Ryan himself, and a way to get the news out!

Ryan may be keeping up with the Port Charles news online wherever he is now, and seeing something like this would definitely grab his attention! Lulu Falconeri (Emme Rylan) is looking to interview Ava, and once that is published then Ryan might see that as well, and Ava will definitely want to give her new romance some publicity!

However, Laura and Kevin may talk to Lulu ahead of time to let her know the romance is not real and part of a plan. Mac and Felicia may want to talk to her as well so she will know the plans will not cause any danger to her!

Ava and Kevin's fake relationship is in full swing and Lucy Coe has something to say about it. @MauraWest @EmmeRylan
Tune into a tense, new #GH – STARTING NOW on ABC! @thejonlindstrom pic.twitter.com/GHm2GFT02U

Ryan will return for May sweeps, and it’s entirely possible he will call Ava to let her know he’s alive! Or, he may deliver some threats! Stay tuned to General Hospital and keep checking GH spoilers frequently for all the latest news, updates, and developments!