The Young And The Restless Spoilers For April 29-May 3: Rey’s Shocking Discovery–Lola And Kyle Make Love– Jack’s Heartbreak 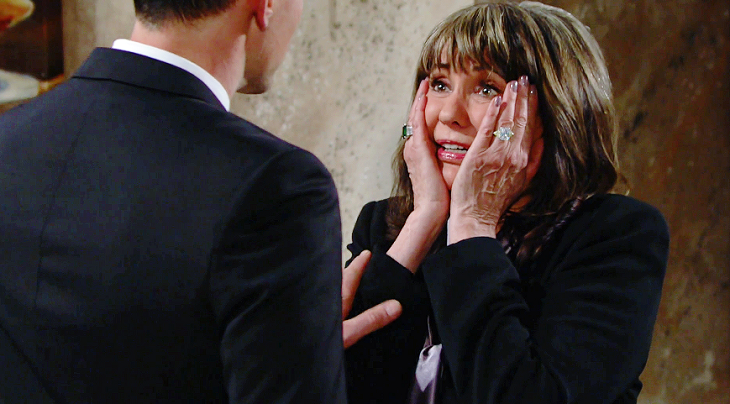 The Young and the Restless (Y&R) spoilers tease that the week of April 29 will be all about secrets, betrayal, and heartache. Rey Rosales (Jordi Vilasuso) will discover a secret so stunning that it will have Sharon Newman (Sharon Case) in shambles. Lola Rosales (Sasha Calle) and Kyle Abbott (Michael Mealor) will finally make love for the first time.

And, Jack Abbott (Peter Bergman) will face heartbreak when he realizes his mother, Dina Mergeron (Marla Adams) is slipping away. Here’s what you need to know about the upcoming week on Y&R.

Kyle has made it clear to Summer Newman (Hunter King) that she loves Lola and not her –even though she is his wife. The truth is, Summer should have seen this coming. He told her he was only marrying her so she would donate part of her liver to Lola. However, Summer thought once he saw how great they were as a team, he’d forget all about Lola.

Y&R spoilers state that Kyle ended his marriage last week. He told Summer that he loved Lola and he couldn’t give her up. This week, Lola and Kyle will make love. They know that this will complicate things and they are prepared for Summer wrath. However, Summer isn’t ready to give up Kyle yet. It sounds like Lola needs to buckle up for the bumpy ride ahead.

Young And Restless Spoilers — Jack’s Heartbreak For His Mother

Over the past two years, Jack has wanted to be Dina’s primary caretaker. He stepped away from his position at Jabot thinking he could handle her. he quickly discovered that it was far harder than he imagined.

After some adjustments and hiring help for his mother, things were going okay. She remained home and seemed to be doing as well as can be expected in her condition. However, this week she takes a turn for the worse and Jack’s worst fears become reality.

Dina begins to slip away and her nurse cannot handle her care. Y&R spoilers say that Dina’s doctor recommends Jack consider putting her in a long-term facility that specializes in Dementia. Of course, Jack scoffs at the idea but later begins to realize it might be for the best. It will be a very emotional week of Jack.

Sharon and Rey will find out a secret so shocking that she worries how Nick Newman (Joshua Morrow) will handle the news. She cannot believe her ears when Rey tells her Victor Newman’s (Eric Braeden) son, Adam Newman (Mark Grossman) is alive. She didn’t think it was possible.

They will quickly realize that this could wreak havoc on their relationship. Apparently, according to Y&R spoilers, Adam may not remember Chelsea Newman (Melissa Claire Egan) and will have some memory issues. But he will remember his love for Sharon. Does that mean Shadam is back on? Keep watching to find out what happens next!