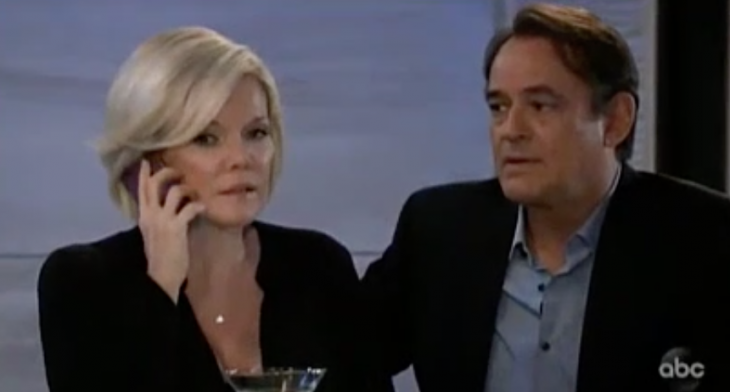 Welcome to your Tuesday, April 30th General Hospital recap! We begin our day at the Dawn of Day house where Sam McCall (Kelly Monaco) is going through the personnel files in the locked room. She sees that Shiloh Archer (Coby Ryan McLaughlin) must have a video camera in the living room of the DOD house.

She walks right out the room and runs right into Shiloh Archer (Coby Ryan McLaughlin) who says she should not be in that room. At Alexis Davis’s (Nancy Lee Grahn) house, Dr. Neil (Joe Flanigan) and Sonny Corinthos (Maurice Bernard) enter the front door. They say there is a possible new complication with Kristina Davis (Lexi Ainsworth), she called Valerie Spencer (Paulina Bugembe).

Harrison Chase (Josh Swickard) is in the hospital elevator with Valerie Spencer (Paulina Bugembe) where he relays his annoyance with Margeaux Dawson (Elizabeth Hendrickson). She seemed to be either defending Shiloh Archer or defending Sonny Corinthos. He discusses how it seems that Margaux has a fixation with Shiloh and Dawn of Day. Valerie tries to figure out what phone number Kristina called from.

At the Quartermaine mansion, Franco Baldwin (Roger Howarth) meets up with Drew Cain (Billy Miller). Franco says that he looks like hell, but he understands why. Franco says he’s come by to see Oscar Nero (Garren Stitt) and wants to drop off a painting he did for him. 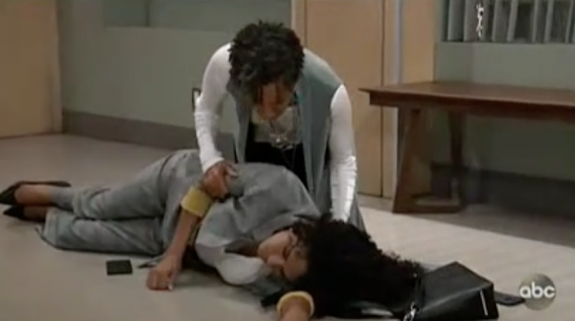 At the metro Court, the group plotting to catch Ryan is wondering if the plan has worked. Lulu Falconeri (Emme Rylan) says the video she posted is getting traction on social media, suddenly Ava Jerome’s (Maura West) phone rings. The call is from an unknown number and turns out it was just a wrong number.

Max Scorpio (John York) isn’t certain when Ryan will show up in town from his injury. Felicia (Kristina Wagner) thinks he will show up in whatever state he is in. She’s also worried that Laura Spencer (Genie Francis) has a target on her back. Lulu decides to do a series of videos showcasing Ava, that hopefully will draw Ryan to them.

Sam and Milo have a ton of notes to compare, West Coast. Was she able to take anything of importance out of DOD's records room?
An all-new #GH starts RIGHT NOW on ABC! @kellymonaco1 pic.twitter.com/BeKMl4dQip

In Canada, Curtis Ashford (Donnell Turner) is questioning the drug addict, asking who was the woman that he sold the drugs to. The dealer says he did not catch her name, she was just a random woman hanging out on the docks.

At the hospital, Hamilton Chase (Michael Easton) is on the phone annoyed and slams it down, Elisabeth Webber (Rebecca Herbst) asks what is wrong. He asks if she has heard from her sister Hayden lately. Elizabeth shes has not heard from Haley in ages and wonders why he wants to reach her now. We can hear Stella screaming for help as Elizabeth and Finn head over. 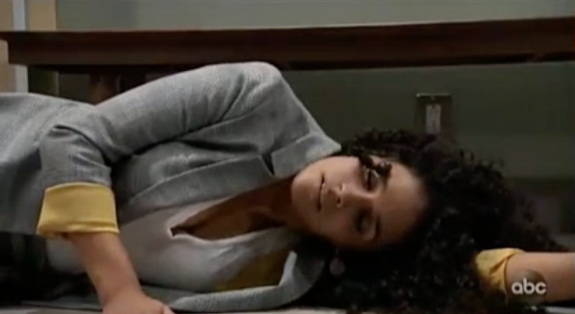 At the hospital, Jordan Ashford (Brianne Nicole Henry) gets dizzy and collapses on the floor. Aunt Stella (Vernee Watson) sees her and runs over to cradle her limp body. Finn tries to get Jordan to open her eyes but she’s completely unconscious. Jordan slowly wakes up in the hospital bed and Stella explains what happened. Finn says that she has a disease that is affecting her only kidney and they will need to do a course of antibiotics.

Finn orders a round of antibiotics while Stella steps out to question him about Jordan’s status. Elizabeth asks Jordan if she should contact Curtis – she’s hesitant.

At the Dawn of Day house, Shiloh Archer (Coby Ryan McLaughlin) catches Sam McCall (Kelly Monaco) snooping by the locked room. He opens the door and she explains she was just looking for some paper and pens. Sam asks him why the door remains locked and he says only those who are part of the trust have access.

Mark aka Milo (Drew Cheetwood) approaches them and says that he and Sam are going to lunch to discuss the classes he should take.

Alexis Davis (Nancy Lee Grahn) is worried that they are all going to be arrested if Valerie comes for them. Sonny says if she had not left her cellphone out, this wouldn’t have happened. Dr Neil says that the technique of motivational interviewing is the way they need to approach Kristina.

There’s a knock on the door and its Detective Chase and Valerie Spencer asking to come in. They ask if they can discuss the whereabouts of Kristina Davis (Lexi Ainsworth). 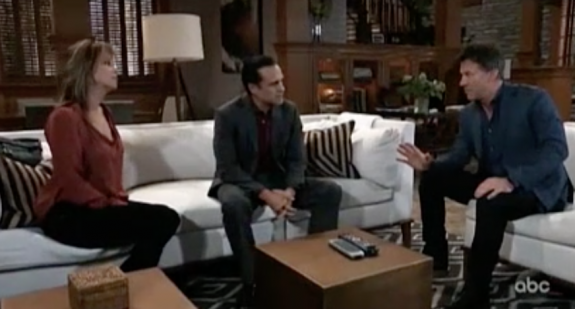 Valerie asks Alexis if she can track Kristina via her cellphone. Alexis says she will not disclose her location to them and its none of their business, as the officer’s leave. Mac is worried about the danger level for all of them, but specifically Kevin and Felicia.

Curtis arrives back in Port Charles and is by Jordan’s bedside when Finn says she most likely will need a transplant. Sam tells Milo and Sonny that she knows she must join the trust. Shiloh is in the locked office and says to himself he cannot wait to see what secrets Sam will reveal to him ……flash to preview