General Hospital Spoilers: Valerie Feels Threatened By Someone — Does Shiloh Catch Her Snooping Around At Dawn of Day? 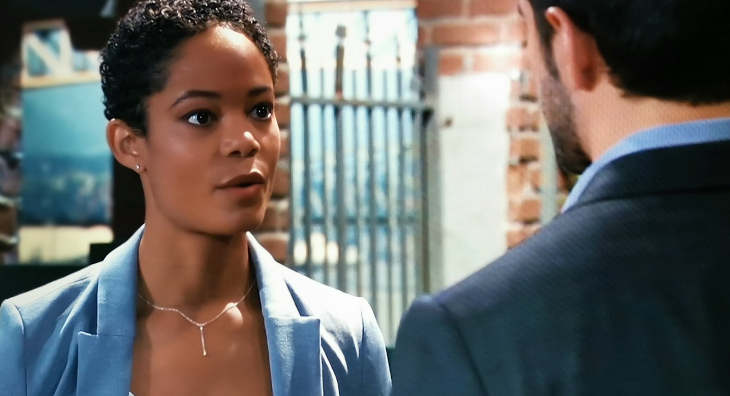 General Hospital (GH) spoilers tease that Detective Valerie Spencer (Paulina Bugembe) will be threatened this week. Will Shiloh Archer (Coby Ryan McLaughlin) find her snooping around Dawn of Day and warn her to stay away? Or would Shiloh really be stupid enough to threaten a cop?

Of course, this may not be a verbal threat; she may feel threatened if being discovered while she’s snooping around without a search warrant. She came once in a recent episode and saved the day for Sam McCall (Kelly Monaco), interrupting what looked like Shiloh trying to get her to strip for him up in the initiation room!

This time if she goes in and starts snooping around and looking for Kristina Corinthos-Davis (Lexi Ainsworth), or evidence that she was taken against her will, such as her belongings being left in her room, for instance, she might encounter District Attorney Margaux Dawson (Elizabeth Hendrickson), who might threaten to get her fired if she doesn’t stop investigating without a search warrant, which Margaux is probably not going to grant her!

If she runs into Shiloh, he may also threaten her in a roundabout way by reminding her that she would need a search warrant to look around in the Dawn of Day house in rooms other than ones open to the public! Perhaps “intimidate” would be a better word than “threatened”. Shiloh usually doesn’t outright threaten people, not even people like Jason Morgan (Steve Burton); he intimidates!

Or perhaps she’s not at the Dawn of Day house at all when she’s threatened; maybe she’s trying to look in the windows at the Corinthos compound to see if Kristina is in there and gets threatened by Jason Morgan (Steve Burton) or Sonny’s security team!

Why is Margaux so reluctant to connect Shiloh with Kristina's mysterious call? Valerie and Chase would like to know.
A brand-new #GH starts RIGHT NOW on ABC! @Theehendrickson pic.twitter.com/238yhEZN1S

That would really not be a cop-like thing to do, that would be more like something a private investigator might try; Valerie’s got her badge, maybe she should try flashing it!

Other General Hospital spoilers later in the week tease that Valerie will be somewhere where Alexis Davis (Nancy Lee Grahn) sneaks out past her; will Alexis be arrested for something, or will Valerie be over at the Corinthos safe house talking to Kristina? Stay tuned to General Hospital and keep checking GH spoilers frequently for all the latest news, updates and new spoilers!