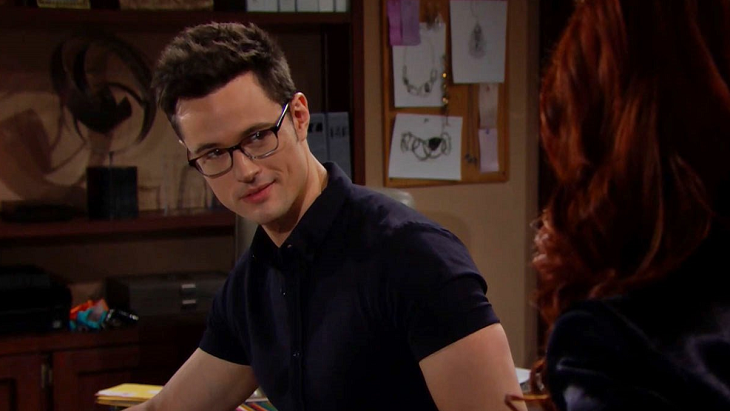 The Bold and the Beautiful (B&B) spoilers for Wednesday, May 1, tease that Wyatt Spencer (Darin Brooks) will be feeling needy. He recently walked in on Sally Spectra (Courtney Hope) and Thomas Forrester (Matthew Atkinson) at Forrester Creations as they were talking about Thomas’ plan to break up Hope Spencer (Annika Noelle) and Liam Spencer (Scott Clifton).

Of course, Wyatt didn’t hear the gist of the conversation, but he knew that it had something to do with Hope, and that it didn’t sound good. And when he asked Sally about the conversation, she lamely promised that nothing was going on between herself and Thomas and that she wasn’t keeping any secrets from him.

Wyatt accepted Sally’s words, but there’s a part of him that feels like something’s going on between Thomas and Sally. According to B&B spoilers, Wyatt will decide that he needs some companionship, so he’ll go to see Florence “Flo” Fulton (Katrina Bowden), and he’ll ask her out to dinner.

But then one thing will lead to another, and B&B spoilers say that Flo will end up kissing Wyatt once again. This will be the pair’s third kiss since Flo first bumped into Wyatt at Bikini Bar, but this one will occur when Wyatt’s feeling vulnerable after what happened to Sally. Will he kiss Flo back?

Meanwhile, on the new episode of B&B on Wednesday, May 1, Thomas will push forward with his plot to manipulate Hope. Thomas succeeded in getting Liam to go to Paris to spend time with Steffy Forrester (Jacqueline MacInnes Wood) and the girls. Now he’s got Hope’s undivided attention, and that will give him the opportunity to put the next part of his devious plan in motion.

According to B&B spoilers, Thomas will subtly push Hope to cut Liam loose. He’ll suggest that she should make the decision for Liam about whether he should be with her or go be with Steffy, Kelly Spencer (Chloe Teperman and Zoe Pennington), and Phoebe Forrester (Isabella de Armas and Rosalind Aune).

He may suggest that if Liam won’t go be with his family on his own, then Hope should end the marriage and force the issue. Of course, Hope has been feeling guilty about keeping Liam from Kelly for a long time now, so she’ll probably be receptive to what Thomas is saying. But will Hope seriously consider leaving Liam?