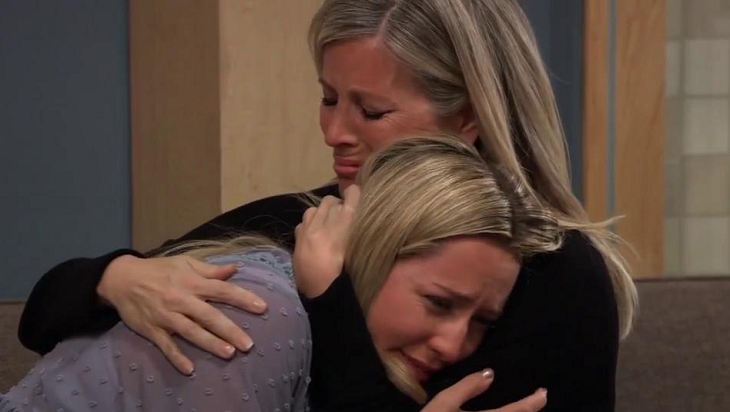 Welcome to your Wednesday, May 1 General Hospital recap! We begin our day at the Quartermaine mansion where Olivia Falconeri (Lisa Locicero) is making a scrapbook of pictures with Oscar Nero (Garren Stitt) in them.

Upstairs at the mansion, Joslyn Jacks (Eden McCoy), Drew Cain (Billy Miller), and Kim Nero (Tamara Braun) are keeping vigil next to Oscar Nero’s (Garren Stitt) bedside. Drew says Joslyn should go to bed, but she wants to stay by his side all night. At the hospital, Dr. Terry Randolph (Cassandra James) is fretting to Elizabeth Webber (Rebecca Herbst) about Oscar’s status. She wishes there was more she could do for him.

At the hospital, Carly Corinthos (Laura Wright) is looking through a window at all the new babies. Sonny Corinthos (Maurice Bernard) approaches and says he knows she has a doctor appointment today and he wants to be there for her. Carly frets about how to handle Joslyn losing Oscar, especially after she already lost Morgan.

At Charlies Place, Julian Jerome (William Devry) has called Kim Nero (Tamara Braun) to check on the status of Oscar. Julian says that he loves her and is there for her.

At Charlies Place, Cameron Webber is sitting at a table with Trina Le (Sydney Mikayla) working on a probation assignment.

At the Quartermaine mansion, Drew Cain (Billy Miler) is trying to comfort a worried Kim Nero (Tamara Braun). Joslyn is reading a book out loud to Oscar when she falls asleep – suddenly we see the back of a woman standing in front of Oscar’s bed. Oscar says he recognizes her, but he’s not sure where he’s seen her before. He calls out to Josslyn in a panic, but there’s no woman there.

Sonny and Carly never imagined they'd be expecting another child. And he or she will be here before they know it.
An all-new #GH starts RIGHT NOW on ABC! @lldubs @MauriceBenard pic.twitter.com/xIjRCisn6Z

Oscar says that he suddenly feels better and tries to climb out of bed. Kim and Drew take him to General Hospital right away to get tests done. Monica arrives with Ned and Olivia and explains the phenomena of suddenly feeling better, right before death. It’s a chance to say goodbye to loved ones. They all wait around the hospital for hours as the doctors run tests. Oscar comes back over with Terry and we see the backs of Lila and Edward Quartermaine head up the main GH stairs.

Terry says that she ran the tests over and over and the tumor has miraculously shrunk. Josslyn takes Oscar to Carly and Sonny to relay the great news.

The whole crew, Josslyn Oscar, Cameron, Trina, Kim, Drew, Ned, Olivia, etc. all gather to celebrate Oscar’s miraculous recovery. Oscar does a speech and tells all of them that he loves them. We the audience can tell this is either a dream or a vision.

Oscar talks to Josslyn and says he knows why he was given this extra time. He realizes that he needs to finally let go. Next thing we know we are back at the mansion and Oscar is asleep – the whole sequence has been a dream.

Terry thanks Elizabeth for being by her side and supporting her with Oscar. Trina reads Cameron’s assignment when he’s not looking and is impressed. Ned walks Monica out of the family mausoleum as she says goodbye to Aj, Edward, Alan, and Lila. In Oscar’s room, we see him leave his body and kiss Josslyn goodbye……flash to preview