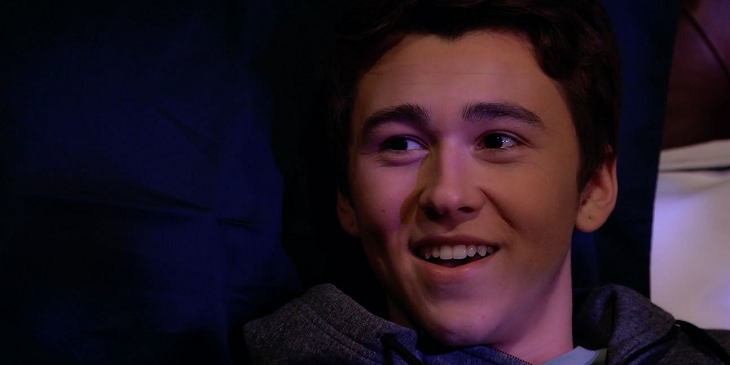 General Hospital (GH)  spoilers tease that Thursday, May 2 will be a day of drama and tears as Dawn of Day drama picks up, and the aftermath of Oscar Nero Quartermaine’s (Garren Lake Stitt) death hits his loved ones.

Franco Baldwin (Roger Howarth) stops his stepson Cameron Webber (William Lipton) in a hurry up some stairs, and tells him to stand still long enough to hear him out! Is Franco trying to tell him about Oscar’s passing on, or will he be talking to Cam about something else?

He’s probably giving Michael a heads up on what could happen and why the investigation is taking place, to begin with, as he tells him if they don’t have Kristina stashed away somewhere, she could be in danger so they have to investigate.

Drew and Kim are coming to terms with the reality of Oscar's prognosis. @TamaraBraun #BillyMiller
Tune into an emotional, new #GH – STARTING NOW on ABC! pic.twitter.com/uETx0DrN09

Elsewhere, Sam McCall (Kelly Monaco) tells Jason Morgan (Steve Burton) what she found when she was in the Dawn of Day office; even though she didn’t find Kristina’s file, she did find that Shiloh Archer (Coby Ryan McLaughlin) has one on her! Will she get another chance to get at Kristina’s, or will Shiloh be suspicious of her now?

General Hospital Spoilers: Robert Is Holding Back From Anna– Does He Want Her Back?

Shiloh confronts Willow Tait (Katelyn MacMullen) with some unwelcome news; he tells her that her mother, Harmony (Inga Cadranel) and he talked through everything! He more than likely knows now that Willow left Dawn of Day pregnant with his child, but is he buying that she miscarried?

Meanwhile, at the Quartermaine mansion, Josslyn Jacks (Eden McCoy) has just woken up after falling asleep reading a book to Oscar. She likely has checked him and realized he has died while she napped, and calls her dad Jasper Jacks (Ingo Rademacher) in tears, telling him she needs him!

Dr. Kim Nero (Tamara Braun) too, has collapsed in tears as Drew Cain (Billy Miller) tries to comfort her and encourage her to be strong.

There will be some tearful episodes as the rest of Oscar’s friends and family get the news, and General Hospital viewers will see some very sad scenes play out.