The Bold And The Beautiful Recap, Wednesday, May 1: Wyatt Makes His Move On Flo–Nanny Tells Liam He Belongs With Steffy 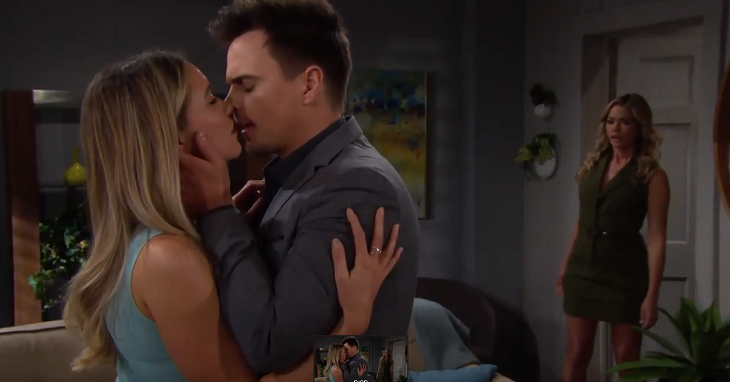 The Bold and the Beautiful (B&B) recap for Wednesday, May 1 finds Wyatt Spencer (Darin Brooks) and Flo Fulton (Katrina Bowden) realizing that there are still some sparks left between them. Also, Thomas Forrester (Matthew Atkinson) has a message for Hope Logan (Annika Noelle) while Liam Spencer (Scott Clifton) is reconsidering a future with Steffy Forrester (Jacqueline MacInnes Wood) and their two daughters.

It begins with Hope describing her connection to Baby Phoebe with Thomas at Forrester Creations. Even though she’s not Phoebe’s mother, she can’t help but feel a pull towards the tot and misses her incredibly.

Meanwhile, Sally Spectra (Courtney Hope) is visibly agitated when Wyatt asks her if she can have dinner with him and Flo. She declines and he says that he will go on his own. Wyatt also points out that Sally has been working a lot and that they haven’t spent much time together.

He’s also disappointed that she decided against the idea of moving to Spencer Publications. Sally then brings up Flo, with Wyatt saying that she’s nothing more than a friend. Afterward, Wyatt sees a text from Thomas on her phone.

In Paris, Liam is bonding with the girls and their new nanny. The Nanny says that Steffy talks about Liam all the time. She also thinks that Steffy is still in love with Liam. Even though Liam says that he loves his wife Hope, he often thinks about what kind of life he would have with Steffy and the girls.

At one point, Liam even considers staying in Paris. That’s when the nanny takes Phoebe and places her in his arms and says that he is her father no matter what. Liam agrees.

Over at Flo’s apartment, her mother Shauna Fulton (Denise Richards) and Zoe Buckingham (Kiara Barnes) go over what their next steps should be. They make a pact to never, ever tell the truth about the baby scandal. The three women are interrupted by Wyatt.

When they leave, Wyatt confesses to Flo that she’s been on his mind. Flo mentions that Hope offered her a job at Forrester Creations. They get into an argument with Wyatt telling her not to be like his girlfriend, Sally. Suddenly, Wyatt then kisses Flo with Shauna re-entering the room. Once he leaves, Shauna makes her daughter promise her that she will never tell her secret to Wyatt.