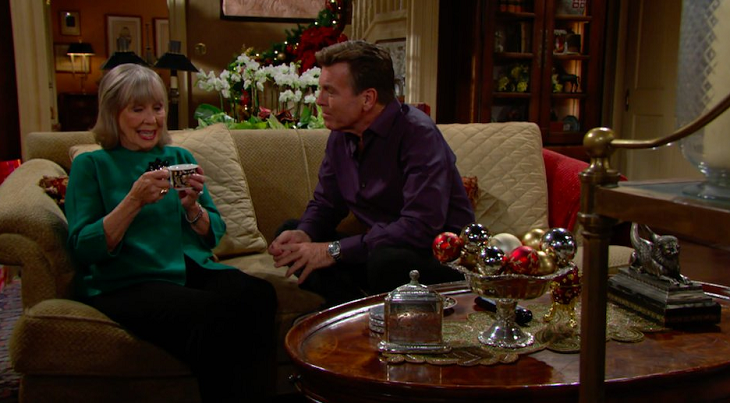 Marla Adams (Dina Mergeron) has been living with her Alzheimer’s diagnosis for awhile on The Young and the Restless.  How the Abbott family handles Dina’ deteriorating mental state will soon be known.

What’s not in doubt is the impressive career credits this 80-year-young actor has amassed across six different decades. The veteran actor’s first role was in the classic 1961 movie, ‘Splendor in the Grass’. She appeared as June in the film that starred Natalie Wood and Warren Beatty.

Add to the above Adams’ numerous other television and movie roles from the 1960s through today. Along with her continuing work on Y&R, she’s appeared as Nadine in this year’s film feature, ‘Nadine’.

Longtime Y&R fans recall that Adams debuted as Dina in 1986. Her alter ego was added to lengthen the backstory of the Abbott family. Jerry Douglas (John Abbott) joined the cast in 1985, as the clan’s patriarch. His tumultuous relationship with his wife, Dina, served to introduce Adams’ alter ego.

Dina wasn’t a main focus on Y&R in the mid-1980s, as she only appeared in a smattering of episodes that focused on the Abbott’s marital troubles in past years. After leaving town, Dina twice returned for very brief stays in 1991 and 2008.

Y&R Spoilers– What’s Next For Dina?

Adams rejoined the cast in 2017, which allowed the completeness of her talent to be delivered. The depth of the arc Adams was given to play was matched, if not exceeded, by her breath-taking turn as a once energetic character who was just beginning to grapple with a debilitating disease.

It was not a surprise to see Adams nominated for a Daytime Emmy Award in 2018. She didn’t win, but had already earned Y&R’s fans complete respect for a series of scene-stealing performances.

Hopefully, the Abbott family remains in regular contact with Dina, whether she remains in the mansion with regular care, or is placed in a specialized facility. Adams’ current performances likely rank with the best of her entire, impressive career. Fans of expressed talent, not just daytime shows, will benefit, along with the Y&R cast and crew, by Adams’ continued presence on this iconic show.