The Young And The Restless Spoilers: Thursday, May 2 – Victor Visits The Mystery Patient – Kyle And Lola Make Love – Dina Worsens 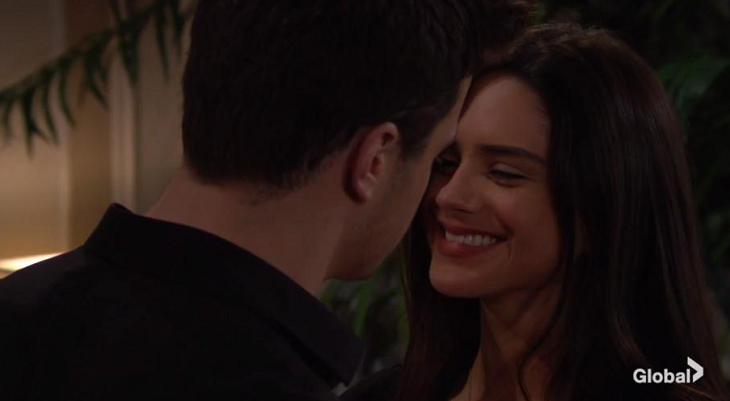 The Young and the Restless (Y&R) spoilers for Thursday, May 2, tease that Lola Rosales (Sasha Calle) and Kyle Abbott (Michael Mealor) will enjoy their time together on the rooftop of Society. They’ll spend time talking and they’ll marvel that everything is finally coming together for them. They’ll slow dance and kiss, and Lola will say that she wants to make love.

Meanwhile, at Nick Newman’s (Joshua Morrow) house, Summer Abbott (Hunter King) will get support from her dad over her split from Kyle. Nick won’t be happy with Kyle, but Summer won’t want him to go start anything. They’ll discuss her staying on at Jabot, and Nick will wonder if she’s holding out hope that Kyle will come around. Then they’ll drown Summer’s sorrows in some ice cream and watch TV together.

Next on Y&R, at the Abbott estate, Jack Abbott (Peter Bergman) will worry about Dina Mergeron (Marla Adams) when she seems out of it. He’ll have to call Lauren Baldwin (Tracey E. Bregman) and cancel their meeting, and later the doctor will arrive, only to warn Jack that there will be more of these episodes for Dina.

Lauren will arrive at the house and they’ll talk about Dina, and Lauren will offer her support. Suddenly Dina will appear and assume that Lauren is “Jackie’s” girlfriend. Jack and Lauren will share a private laugh and hug over that.

Next on Y&R, at Sharon Newman’s (Sharon Case) house, she’ll fill in Rey Rosales (Jordi Vilasuso) about her confrontation with Mia Rosales (Noemi Gonzales) earlier. They’ll discuss going to Las Vegas, and Sharon will insist that she’s going. Rey will leave the psychiatrist listed on Victor Newman’s (Eric Braeden) psychiatrist bill a voicemail, and Sharon will look the doctor up on the internet. Turns out that he specializes in memory retrieval.

Next on Thursday’s episode of Y&R, Nikki Newman (Melody Thomas Scott) and Paul Williams (Doug Davidson) will chat at Crimson Lights. Nikki will tell Paul that Rey is investigating Victor in Las Vegas, which will interest Paul since Rey is supposed to be solving the case of Lola’s attack. Nikki will show Paul the “Queen of Las Vegas” article she found, and Paul will agree to look into it.

In Las Vegas, Rey and Sharon will arrive in their hotel room. Paul will call Rey and wonder why he’s in Las Vegas when he’s supposed to be on Lola’s case. Rey will tell Paul to keep his job.

Now in a room at the GCAC, Kyle and Lola will make love passionately, then Lola will muse that it was worth the wait, although a part of her wishes she hasn’t waited. They’ll cuddle and enjoy their time together.

The Young And The Restless Spoilers: Victor Reveals The Adam Truth To Sharon– Will He Make Her Swear To Keep It A Secret? https://t.co/RPdPIK7dCY @CBSDaytime @YandR_CBS @YRInsider #YR #Spoilers

Finally, on Thursday’s episode of Y&R, Victor will be at the door of a hotel room. He’ll knock on the door and ask the person inside to open the door because he wants to help.