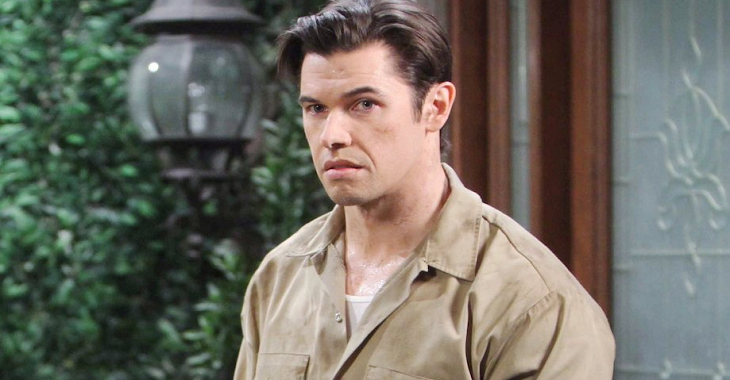 Days of Our Lives (DOOL)  spoilers tease that Brady Black (Eric Martsolf) will be comforting Nicole Walker (Arianne Zucker) over the missing Holly Jonas (Harlow and Scarlett Mallory) when Xander Cook Kiriakis (Paul Telfer) walks in, and it will probably not be pretty when Xander confronts Brady as to what he’s doing with Nicole!

Xander has felt a rivalry with Brady and also with Daniel Jonas (Shawn Christian) ever since childhood, and particularly over Nicole, who Xander has been interested in romantically for quite a long time!

Xander and Nicole were romantically involved for a short time, but the problem was, at least for him, Nicole was only using him to protect Eric Brady (Greg Vaughan) from the fallout of some diamonds that Xander and Serena Mason (Melissa Archer) had stolen that had been part of an elephant statue that Serena and Eric had bought in Africa years earlier. Xander and Serena had been partners in a scam involving the diamonds.

But in 2018 Nicole actually married Xander, who had blackmailed her into it with a recording of a confession that she had killed Deimos Kiriakis (Vincent Irizarry) and legally, she’s still married to Xander since either Xander or she were missing long enough to have been declared dead!

This is why Xander made the comment in the motel room to Ted Laurent (Gilles Marini) in Tuesday, April 30 that he was Holly Jonas’ (Harlow and Scarlett Mallory) “step-dada”!

So, since technically, Nicole is still legally married to Xander, and he still wants her, he would have a right to tell any man he saw with her to get away from his wife! However, Days of Our Lives viewers know Nicole is her own woman and feisty at that, and she’ll probably tell Xander to take a long walk off a short pier!

As sick as it sounds, Brady may be taking advantage of the situation to comfort Nicole so she’ll get close to him again – just like when he was comforting Chloe Lane (Nadia Bjorlin) over the same issue a few days earlier…but that’ s Brady, more rebounds than a trampoline!