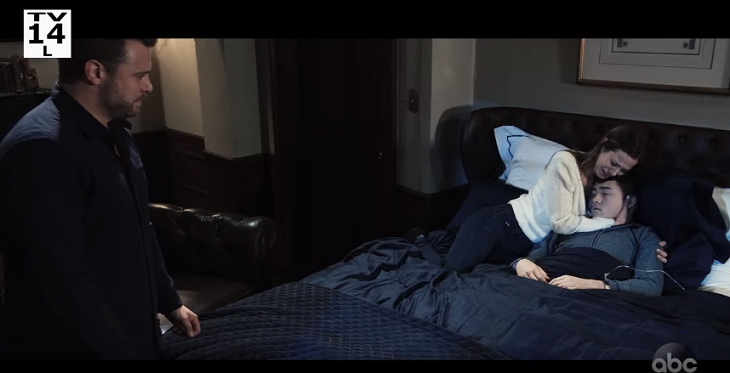 General Hospital (GH) spoilers tease that Oscar Nero’s (Garren Stitt) family and friend will be devastated by his death. Even though they knew it was coming, it will be tough to process why this happened.

Josslyn Jacks (Eden McCoy) will take his death particularly hard.  As well as his parents, Drew Cain (Billy Miller) and Kim Nero (Tamara Braun).  Here’s what you need to know about the new GH promo.

GH Spoilers– Kim And  Drew Comfort Each Other

In a time that can either bring people closer or provide distance, Kim and Drew lean on each other for comfort.  They knew that Oscar’s death was coming, but it doesn’t make it any easier.

While they knew he didn’t have much time left, Drew was hoping for a miracle.  GH spoilers state that he still believed that his son could have a fighting chance to beat the odds or find a treatment plan that would work.

Kim, on the other hand, knew that Oscar wouldn’t survive this.  Even though she knew the reality of her son’s situation, it doesn’t make it any easier.  In fact, it may make it harder as she had to stand around, know there wasn’t any hope, and watch her son die.

In the promo, they lean on each other while they are both emotionally drained. They cannot imagine living life without Oscar in their life.  Kim leans on her boyfriend, Julian Jerome (William deVry) as she tries to understand her son’s death.

Oscar's having a good day today… but what does it mean for his health moving forward?
A dramatic, new #GH starts RIGHT NOW on ABC! @itsgarrentho pic.twitter.com/vmNUe7WWRk

At some point, Kim’s bound to have the feeling of why is Oscar gone when she and Drew get to live their lives.  As parents, it’s a bad feeling and one that will stay with them for a very long time.

In the new GH promo, Joss whispers to Oscar after he passed away, “I will love you forever.”

She is clearly devastated by his death and she cannot imagine life without him.

On one hand, he saved Josslyn. On the other, Jax inadvertently screwed over Nelle. Should Carly forgive him? Find out RIGHT NOW on ABC! #GH pic.twitter.com/BCIzdj2A6T

In the preview for Thursday, May 2, Joss calls her father Jasper ‘Jax” Jacks (Ingo Rademacher) for comfort.  Next week, Jax will show up in Port Charles to attend Oscar funeral with his daughter.

What do you think is next for Oscar’s loved ones? Don’t forget to come back later to Hollywood Hiccups for more General Hospital (GH) spoilers, news, and casting updates!