The Bold and the Beautiful Spoilers: Thomas Busted – Liam Flies Back From Paris To Confront Schemer 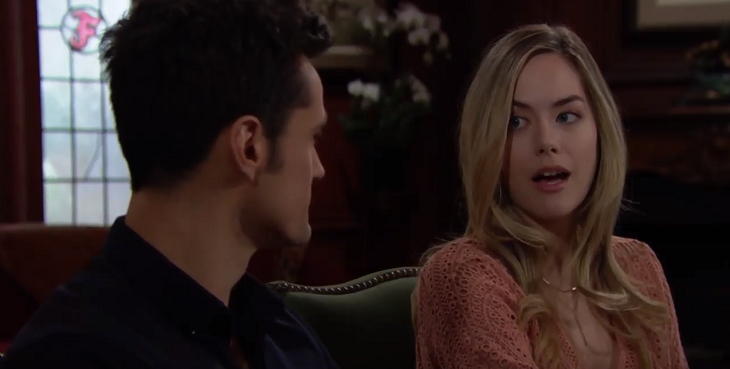 The Bold and the Beautiful (B&B) spoilers tease that Liam Spencer (Scott Clifton) will be in for a big shock. Since he’s been gone in Paris visiting Steffy Forrester (Jacqueline MacInnes Wood) and the girls, a lot has happened.

Thomas Forrester (Matthew Atkinson) has put a plan into place to break up Liam’s marriage to Hope Spencer (Annika Noelle). Thomas decided that he wants Hope for himself and that Liam should be with Steffy.

According to B&B spoilers, Thomas will use various methods to ingratiate himself to Hope. He’ll use Douglas Forrester (Henry Joseph Samiri) as a pawn in his plan, for starters. Thomas knows that Hope has a soft spot for Douglas and that her maternal instincts are triggered whenever she’s around him.

Thomas recently gave Hope a picture allegedly drawn by Douglas, when it was actually drawn by Thomas himself.

But soon, Thomas and his plot to break up Lope will get busted big time. Thomas made the mistake of sharing his intentions with Sally Spectra (Courtney Hope), who was mortified by his plans. Sally will keep his secret for a while, but B&B spoilers say that she’ll soon spill the whole thing to Wyatt Spencer (Darin Brooks).

Of course, Wyatt is very protective of Liam since they’re brothers, and he’ll be horrified to hear what Thomas wants to do to his brother’s marriage to Hope.

The Bold and the Beautiful spoilers indicate that he’ll rage at Sally for keeping the secret as long as she did, and it looks like he’ll immediately get on the phone and tell Liam about what Thomas is up to.

The Bold and the Beautiful spoilers say that Liam will leave Paris immediately and race back to Los Angeles to deal with the Thomas situation in person. He’ll know that Hope is in a vulnerable state right now and that she’ll probably be completely unsuspecting of what Thomas is doing.

After all, Hope tends to see the best in people, and she won’t want to believe that Thomas is out to ruin her marriage.

Week of 5/6: (1/2)
– Sally comes clean to a stunned Wyatt about Thomas’ plans for Hope.
– Brooke reels when Ridge admits how he feels about Liam, Steffy, Hope and Thomas.
Quinn rubs salt in Sally’s wounds when expressing happiness at Wyatt and Sally’s split.#BoldandBeautiful

Week of 5/6: (2/2)
– Liam races back to Los Angeles to save Hope from Thomas’ machinations.
– Flo feels guilty when Wyatt admits it was a secret that became him and Sally.#BoldandBeautiful

We’ll see what transpires between Liam and Thomas when he arrives home, but it looks like it will probably be a bad scene. Liam will be furious that Thomas would try to take advantage of his wife.

Look for some major tension between the men, and a big revelation for Hope as she learns what Thomas was up to. Are you looking forward to seeing Liam confront Thomas?