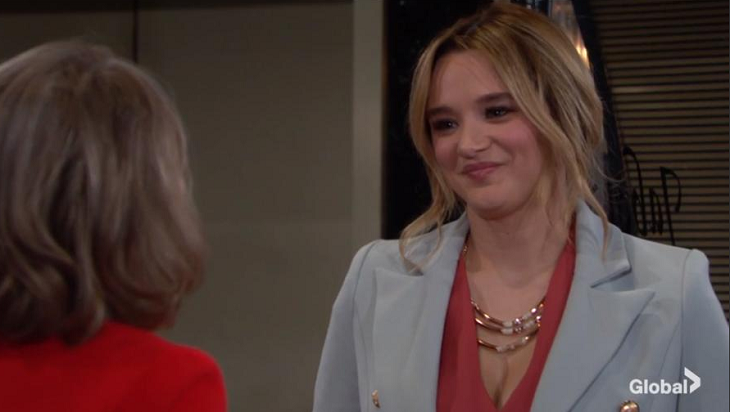 The Young and the Restless (Y&R)  spoilers for Friday, May 3, tease that Sharon Newman (Sharon Case) and Rey Rosales (Jordi Vilasuso) will wake up in Las Vegas together. Later, they’ll visit the psychiatrist that Victor Newman (Eric Braeden) hired.

Meanwhile, back at Newman Enterprises, Nikki Newman (Melody Thomas Scott) will pull up a picture of the “Queen of Las Vegas,” who is high-stakes poker player named “Risa Thompson.”

Y&R Spoilers– Summer And Kyle Are A Good Working Team

Next on Y&R, at Jabot, Kyle Newman (Michael Mealor) will get a text from Lola Rosales (Sasha Calle) telling him to come by Society for lunch. He’ll walk into Jack Abbott’s (Peter Bergman) office to find Summer Abbott (Hunter King), who will announce that she’s staying at Jabot.

Suddenly, Billy Abbott (Jason Thompson) will enter with Rebekah Barlow (Jennifer Taylor) for a meeting. Rebekah will gush over “whiz kids” Kyle and Summer and their social media marketing ideas. Summer and Kyle will pitch some ideas and Rebekah will remark that they’re a great duo.

The Young And The Restless Spoilers: Moved by Neil’s Passing– Nikki Urges Victoria To Reunite With Billy– Will She Take Mom’s Advice?

Next on Y&R, at Society, Abby Newman (Melissa Ordway) will want details from Lola about her and Kyle’s big night. Mariah Copeland (Camryn Grimes) will enter, wanting an interview with them both for GC Buzz. The interview will go well, and Kyle will appear afterward for his surprise. Turns out, the surprise is lunch – the same lunch that Kyle first bought from Lola’s food truck.

In the spirit of honesty, Kyle will let Lola know about Summer staying on at Jabot and the business meeting success with Rebekah. Lola won’t be happy about the development, but she’ll thank Kyle for being honest. Later, Lola will tell Abby that she feels bad for Summer, then realize that Kyle left his tablet.

Next on Y&R, Sharon and Rey will be back in their hotel room when Nikki calls to let Rey know about “Risa Thompson.” Meanwhile, at a casino bar, Victor will talk with Risa, with questions about where “Spyder” is.

Back at Jabot, Summer will be on the phone with Phyllis Summers (Gina Tognoni) when Dina Mergeron (Marla Adams) arrives, dressed up and looking for John Abbott (Jerry Douglas). Summer will pretend to be Ashley Abbott (Eileen Davidson) and keep Dina company when Kyle returns and pretends to be Jack. The three of them agree to have lunch at the GCAC at Dina’s request.

Next on Y&R, at Crimson lights, Mariah will get a text from an unknown number saying “I will not be ignored. Someday soon you’ll know my pain.” A few minutes later, a rude guy will bump into Mariah, scaring her to death. She’ll call after him, but he’ll bolt.

At Nick’s house, Nick and Rebecca will kiss, but Nick won’t be into it. Rebekah will say she thinks he’s a man adrift and not too comfortable with casual hookups. She’ll tell him to think about a time when he was truly happy and try to recapture that.

At Jabot, Lola will arrive to give Kyle his tablet, but Kyle won’t be there. Lola and Jack will chat a bit, and Jack will say that things will work out for everyone. Meanwhile, Kyle will be with Summer, having just dropped off Dina at the house. They’ll then head back to Jabot.

Back with Victor and Risa, she won’t want to help him. She’ll say that when “Spyder” shuts down, he doesn’t open back up easily. Her phone will ring, and she’ll say it’s a “Rey Rosales” calling. Victor will tell her to ignore it, and to let him know as soon as she hears anything from “Spyder.”

Next on Y&R, Summer and Kyle will return to Jabot to find Lola there. They’ll tell Jack what happened with Dina earlier, and he’ll express concern. Summer will gush that it wasn’t a big deal and that she cares about his family. Kyle will then thank Lola for lunch with a big kiss. Meanwhile, in Jack’s office, Summer will tell someone on the phone that she and Kyle can come to New York tonight.

Finally, on Friday’s episode of Y&R, Victor will appear at Rey and Sharon’s hotel room. He’ll say that they’ve accomplished a lot, contacting the psychiatrist and Risa. Victor will say that he wants to talk to Sharon alone. She’ll ask him what’s going on, and he’ll tell her to sit down because there’s something she needs to know.

Be sure to tune in on Friday to catch up on everything happening on Y&R right now. Check Hollywood Hiccups often for updates, news, rumors, and spoilers! And as always, don’t forget to check back with Hollywood Hiccups for all the latest news, updates and spoilers on The Young and the Restless (Y&R) and all of your favorite daytime television shows right here!