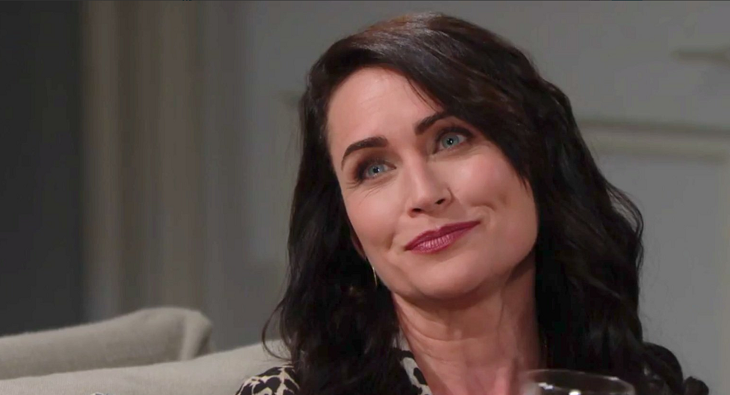 The Bold and the Beautiful (B&B) spoilers tease that Quinn Forrester (Rena Sofer) will soon be pleased as punch. She’s never been one to like her son Wyatt Spencer’s (Darin Brooks) girlfriends. She wasn’t happy when Wyatt was with Katie Logan (Heather Tom), and she’s sure not happy now that Wyatt is with Sally Spectra (Courtney Hope).

Of course, B&B viewers know that Quinn decided to make it her mission to break up Wyatt and Sally. Quinn would prefer that Wyatt paired up with Florence “Flo” Fulton (Katrina Bowden), and she figured that if she caused problems for Wyatt and Sally, she could free up Wyatt to eventually get back together with Flo.

So, Quinn has done her best to undermine her son’s relationship with Sally. She’s gushed over Flo knowing Sally can hear it, and she tried to get Sally to move out of Wyatt’s place. But according to B&B spoilers, “Wally” will self-destruct all on their own, without Quinn’s help.

It will all come down to a big secret. Wyatt will discover that Sally has kept a terrible secret from him – one that directly impacts his brother Liam Spencer (Scott Clifton). Specifically, Sally found out about Thomas Forrester’s (Matthew Atkinson) plot to break up Liam and Hope Spencer’s (Annika Noelle) marriage.

The Bold and the Beautiful spoilers say that Wyatt will go berserk when Sally finally comes clean and tells him about Thomas’ plot to destroy “Lope’s” marriage. Wyatt can put up with a lot, but secrets and deception really bother him, and he won’t be able to get past what Sally kept from him and from Liam. That will lead Wyatt to break things off with Sally.

So, in the end, despite all of Quinn’s attempts to destroy Wyatt’s relationship with Sally, they’ll break up for other reasons. But that won’t stop Quinn from totally rejoicing over the split. The Bold and the Beautiful spoilers say that Quinn will be thrilled by Wyatt and Sally’s split and that she won’t be able to help herself from rubbing salt in Sally’s wounds.

Sally, you're in trouble #BoldandBeautiful pic.twitter.com/Hbsqg7LNVN

Sally and Quinn work together at Forrester, so Sally’s really not going to be able to avoid Quinn going forward. Quinn will surely get her digs in, and she’ll probably taunt Sally about keeping secrets from her son. It will probably be excruciating for Sally.

In the coming days, look for Quinn to be on cloud nine as she dreams of a pending reunion between Wyatt and Flo. Of course, Wyatt may not want to jump right into a new relationship so soon after breaking up with Sally, but that won’t stop Quinn from trying!