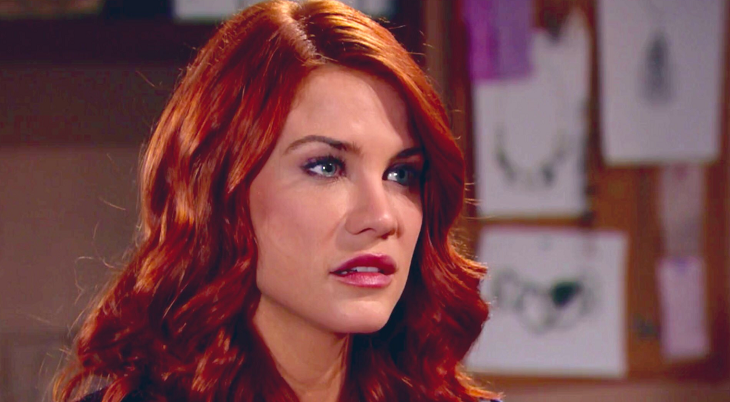 The Bold and the Beautiful (B&B) spoilers for the week of May 6 tease that Sally Spectra (Courtney Hope) and Wyatt Fuller ( Darin Brooks) will get into a heated debate about Thomas Forrester (Matthew Atkinson). Wyatt will confront Sally about secretly texting her ex-boyfriend Thomas.

Wyatt demands an explanation to why she hid it from him. Sally isn’t sure she has to defend herself to him because in her mind it has nothing to do with him. However, Wyatt believes that anything that affects his family he should have known about right away.

In the end, Sally moves out of Wyatt home and a couple breaks up. Is this a permanent break up or can they work things out? Here’s what’s ahead on The Bold and the Beautiful during the week of May 6.

Sally loves Wyatt and she would not do anything to purposely hurt him. She knew that keeping Thomas’s text a secret, that it would hurt Wyatt. She also knew that why would want to know that Thomas was trying to break up his brother and his wife’s marriage. But she kept quiet. Even though this could affect Wyatt’s family, she stayed loyal to Thomas.

Bold and the Beautiful spoilers say that Sally thought that Thomas was just blowing smoke and he wasn’t serious. She never thought that he would actually pursue a married woman.

However, when Wyatt discovered the text messages, he thought that Sally and Thomas were having an affair. Sally didn’t think it was going to be as big of a deal as it was. She thought that she could explain everything and white would understand but it didn’t go that way.

Wyatt becomes furious with her. For him, it became an issue of protecting his brother for any more pain. Liam Spencer (Scott Clifton), who has been through a lot in the last couple of months. Liam and his wife, Hope Logan (Annika Noelle) lost their baby girl just a few months ago.

And before that, his father, Bill Spencer (Don Diamont) slept with Liam’s ex-wife, Steffy Forrester (Jacqueline MacInnes Wood)which happens to be Thomas’s sister. In Wyatt’s mind, he doesn’t understand why Sally could not see how this could be a problem

BOLD Spoilers– Wyatt Believes Sally Is Cheating On Him

Wyatt tells Sally that if Liam finds out about this and somehow hope does cheat on him with Thomas then he will never forgive himself if it’s something he could have stopped.

Sally claps back by saying that Wyatt is letting his mother Quinn Fuller (Rena Sofer) get into his head and poisoned him against her.

Sally, you're in trouble #BoldandBeautiful pic.twitter.com/Hbsqg7LNVN

B&B spoilers say that does Sally points out that she loves him and she would do anything for him but it’s not enough for Wyatt. The most hurtful thing is that Wyatt believes that Sally helps Thomas plot against Lope’s marriage.

Sally admits that she’s upset but he doesn’t trust her anymore, but even more than that,  she’s upset that she’s trusted Thomas when he was just using her.

Frustrated by the situation, Wyatt calls Liam in Paris and let him know what’s going on. Meanwhile, Sally packs her things and moves out. When Wyatt realizes Sally plans to move out, he’s upset. He shocked that Sally would give up on their relationship so quickly. In his mind, they just had a fight and they can make up. But Sally had her mind made up and she moved out.

Sally tells Wyatt that maybe his mother is right about her. She goes on to say maybe she should just move out to give them some space. Do you think Wyatt and Sally will make things work? Or do you think this is a deal-breaker for him? Don’t forget to come back for more The Bold and the Beautiful spoilers, news, and casting updates!