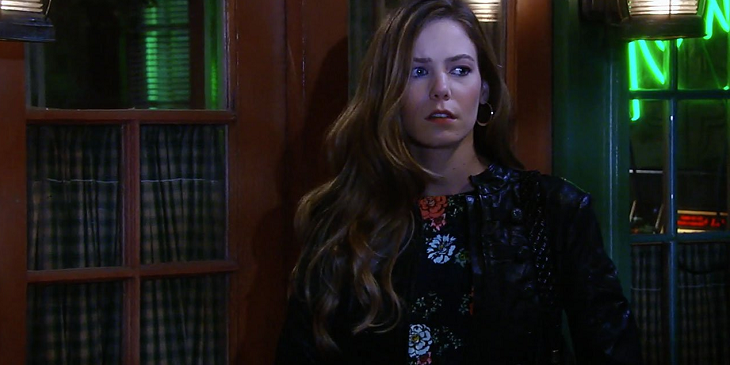 General Hospital (GH) spoilers tease that Nelle Bensen (Chloe Lanier) could pop up in Port Charles at any moment.  The schemer has been quiet since she appeared last but Lanier says that just because she’s off the show right now, doesn’t mean the GH fans will never see her again.

In fact, Chloe, like many of the fans, are anxiously awaiting her return. Here’s what you need to know about what’s ahead for Nelle.

The truth is, Nelle still has quite a bit of storyline to tell. As the GH viewers know, she swapped Willow Tait (Katelyn MacMullen) and Her baby’s to protect the child. She believed at the time that it was for his best interest.

Now, Willow thinks Brad Cooper’s (Perry Chen) adopted son is her child. When in reality, her son died and Nelle’s son is Brad’s kid.  It will be a huge blow to Willow as she has stayed close to Brad in hopes that is her biological child.

General Hospital Spoilers: Are Kristina And Willow In Danger? A Cult Expert Weighs In

Lanier told ABC Soaps In Depth that she lives ten minutes away from the ABC studio and as long as her schedule permits she would love to come back.  ABC’s rep said that Nelle’s return is always a possibility and is something they are looking at down the road.  Right now, they are focusing on other storylines, but Wiley’s parentage will be a focus eventually.

General Hospital Star Chloe Is Glad She Exited From The Show

Chloe said that she is glad that she left the show when she did.  Even though she loved her time on GH, she had lost herself a little bit in the character. She began to not know who she was and she lost part of her identity.

Hey GH fans, would you like to see Nelle return to GH? Vote in our poll below!

Since her GH exit, she has been writing a play with her boyfriend and doing a lot of self -care.  She said the self-care has done wonders for her mental state and she urges everyone to do the same.

As for Nelle’s state of mind, Lanier doubts she’s doing self-care.  She thinks she is plotting her next move.  Chloe did say that she thinks Shiloh Archer (Coby Ryan McLaughlin) has got nothing on Nelle.  She thinks Nelle could have easily run a cult and she’s “kind of” jealous that she didn’t get the chance.

Do you miss Nelle? Would you like for her to come back to Port Charles?  Stay tuned to General Hospital and keep checking General Hospital spoilers frequently for all the latest news, updates, and developments! As always, more detailed spoilers and a full collection of pictures for the week in question will appear on Soap Opera Spy, where there will be more clues and hints over exactly what’s going on.