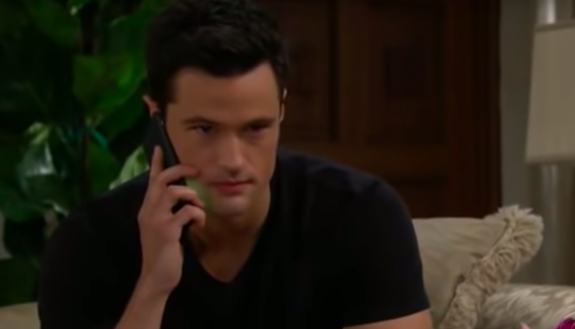 The Bold and the Beautiful (B&B) spoilers tease Thomas Forrester’s (Matthew Atkinson) plan will be blocked by Liam Spencer (Scott Clifton) during the week of May 6. Hope Logan (Annika Noelle) is blindsided by Thomas’ kiss and she lets him know that she is a happily married woman. It looks like a great week ahead on B&B.

As the week ended last week, Thomas pulled Hope in for a kiss, stunning her. She didn’t think that she had given off any signals that indicated her interest in him romantically. She loves her husband and she has no plans on leaving him.

After Thomas’ kiss, he told her she is meant to be with him, showing her a picture of Steffy Forrester (Jacqueline MacInnes Wood), Liam, and the girls. He suggested they are the perfect family.

After learning Thomas’ plans, Wyatt Spencer (Darin Brooks) called his brother in Paris. B&B spoilers state that Liam was shocked and he told his brother he will return home immediately to deal with this. He wasn’t going to let Thomas take his wife from him.

Meanwhile, Wyatt and Sally Spectra (Courtney Hope) face tough times. B&B spoilers say that Wyatt feels as if Sally wasn’t honest with him. She withheld information about Thomas’ plan with Hope. It turns out to be a dealbreaker and leads to Sally moving out and breaking up with Wyatt.

Shauna takes the opportunity to wear a Forrester Original when it presents itself. WATCH FULL EPISODE: https://t.co/IPrcAFC4qH #BoldandBeautiful pic.twitter.com/u5vQfAIeOB

In the B&B promo, Liam confronts Thomas. He lets him know that Hope is his wife and he cannot propose or spend time with her anymore. Liam said that the manipulation of Hope stops right away. Of course, Thomas claims that Hope needed attention, suggesting that Liam belongs with his sister, Steffy.

Liam points out that Steffy has moved on and they co-parent the kids together, but he loves Hope. It’s clear Hope’s head is spinning and she isn’t sure who to trust. She thought Thomas was her friend, only to learn that he only wanted to lure her away from her husband.

As always, more detailed spoilers and a full collection of pictures for the week in question will appear on Hollywood Hiccups, where there will be more clues and hints over exactly what’s going on.