Days Of Our Lives Spoilers: Hope Lashes Out At Eric For Not Protecting Holly-Claims He Broke His Promise To Her! 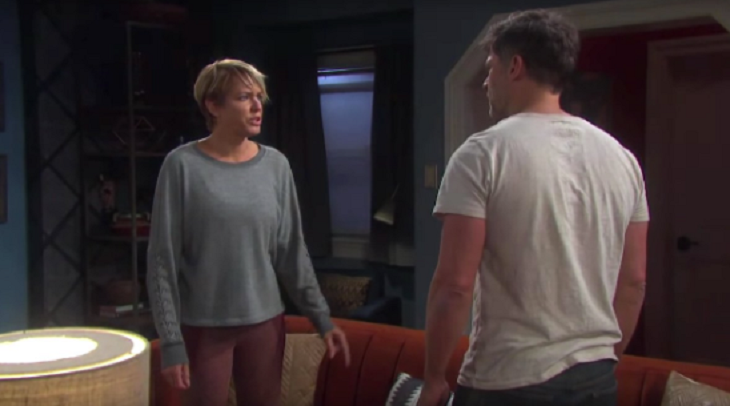 Days of Our Lives spoilers tease that Nicole Walker (Arianne Zucker) will lash out at Eric Brady (Greg Vaughan) for failing to protect her daughter Holly Jonas (Scarlett and Harlow Mallory) when she asked him to! Nicole, like Eric himself and Sarah Horton (Linsey Godfrey) obviously feels that her verbal plea when the warehouse was getting ready to collapse on her for him to take care of Holly if anything happened to her trumped the letter that came where she had chosen her surrogate, Chloe Lane (Nadia Bjorlin) to care for Holly in such a situation.

On the other hand, Nicole hasn’t even mentioned such a letter; could it have been forged? Of course, Nicole just may not even remember she’d written it considering what has happened to her since that time.

The Days of Our Lives weekly preview shows a devastated Nicole being held tightly by Eric as they watch the van, pursued by a police car likely being driven by Rafe Hernandez (Galen Gering) go over a cliff and explode in flames, and a stretcher is brought up by first responders with what appears to be a tiny body in it. Later, back at Eric’s apartment, Nicole lashes out at Eric for not taking care of Holly like she made him promise!

Perhaps it is during this scene that the letter will be brought up because Eric will need to explain to Nicole why Holly was with Chloe instead of with him, or at least with her grandma Maggie Kiriakis (Suzanne Rogers). In either situation, Holly would have presumably not been in danger, although it would have been even easier for Xander Cook Kiriakis (Paul Telfer) to kidnap her from the Kiriakis mansion instead of the DiMera mansion. But then, he wouldn’t have had the advantages of secret passages and tunnels, either!

Fortunately, other Days of Our Lives spoilers tease that Holly’s not dead, and the death was faked; still, it may be some time, perhaps even years, before Holly is found, if as those spoilers tease, she is the victim of a black market adoption!