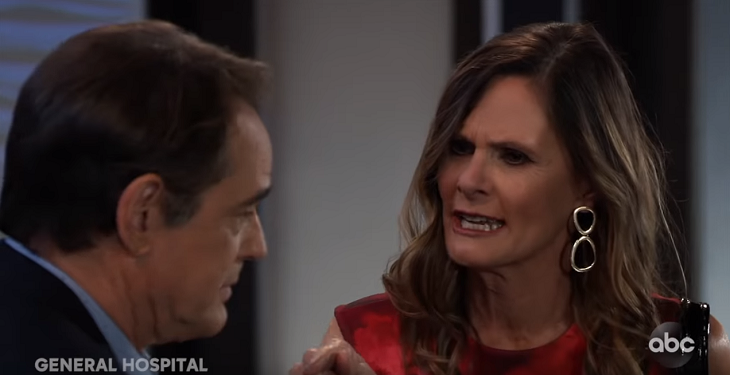 General Hospital (GH) spoilers tease that Lucy Coe (Lynn Herring) will learn an inconvenient truth this week! A new promo video has Lucy, Scott Baldwin (Kin Shriner), Dr. Kevin Collins (Jon Lindstrom) and Ava Jerome (Maura West) all in the Metro Court, where Lucy spots Kevin and Ava together at a nearby table.

Scott is trying to get Lucy’s attention as she looks straight past him to Kevin and Ava. Scott asks her if there’s some kind of disturbance in the force, and she continues to look past him and tells him, “Oh yeah – you could say that!” He then turns towards what she is staring at and does a doubletake, and both he and Lucy stare at the odd combination of Kevin with Lucy, with indignant looks on both Scott and Lucy’s faces.

Lucy asks Scott if he knows what’s going on between the two, and he responds he doesn’t have a clue. Lucy suddenly stands up like she’s ready to bolt from their table and tells him she’s going to get him a clue, as Scotty tries to stop her from going and making a scene at Kevin and Ava’s table. He says, “No, hold on, Lucy!” but it’s too late. She’s already there, and he follows her over.

Meanwhile, as Lucy heads for their table with Scott close after her, Kevin asks Ava if she feels all those eyes on them, and tells her that her interview with Lulu Falconeri (Emme Rylan) must have been pretty effective!

Ava responds that any attention is good attention if it gets Ryan Chamberlain (Jon Lindstrom), Kevin’s psychotic twin brother, out of hiding and back to Port Charles. Kevin says, “Maybe not all the attention” as he notices Lucy heading for them.

Will a funeral for Ryan's hand be enough to get his attention? Click to watch today's dramatic, new #GH – RIGHT NOW: https://t.co/Q8aysjpF6C

Ava says hello to Lucy, and Lucy coyly says it’s funny running into the two of them together and makes a point of focusing on “together”. Kevin responds dryly, “Hilarious.” Lucy pries further, wanting to know if they came together on purpose or just ran into each other in the elevator. Ava tells her they arranged to meet there, as she was sure Lucy and Scott did! Lucy turns to Scott as she tells Ava that they are there working on the Nurses’ Ball and were talking about Ava’s amazing performance last year, and poof! – there she was!

Ava said, Poof! Lucy chatters on, saying it occurred to her how close that Kevin and Ava were getting, and continues to pry, insinuating that they’ve gotten very close, as Scott sarcastically says “Like liver and onions!” Ava tells him to speak for himself! Lucy rattles on, talking about how that kind of chemistry can’t be made up and pointing her discussion about the chemistry between Kevin and Ava towards Kevin.

Lucy then suggests that Scott and Ava go to the Nurses’ Ball together, and Ava informs her that is impossible, and Kevin chimes in that he and Ava are going together! Both Lucy and Scott look at them in shock!

It should be an interesting Nurses’ Ball this year on General Hospital, and even more interesting when Ryan shows up! Stay tuned to General Hospital and keep checking GH spoilers frequently for all the latest news, updates, and spoilers! As always, more detailed spoilers and a full collection of pictures for the week in question will appear on Soap Opera Spy, where there will be more clues and hints over exactly what’s going on.