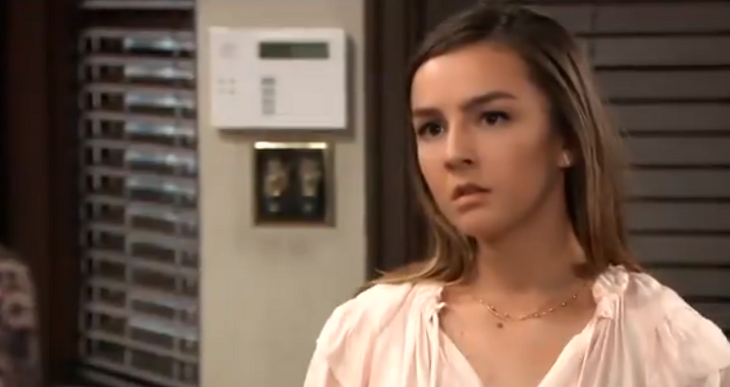 General Hospital (GH) spoilers for Tuesday, May 7 tease another exciting day of drama with more questions than answers! First, Dr. Hamilton Finn (Michael Easton) talks with Anna Devane (Finola Hughes), and it appears to be they are discussing Peter August (Wes Ramsey).

In Monday’s episode, Robert Scorpio (Tristan Rogers) suggested that Anna’s memory of sleeping with Faison and giving birth to a child that she gave up maybe her twin sister Alex Marick’s (Finola Hughes) memory, not her own. Finn is skeptical because he says to her, “We don’t know if any of this is true”.

GH Spoilers– Maxie And Peter Go On A Date In Paris

Elsewhere, Willow Tait (Katelyn MacMullen) is offended as Nina Reeves (Michelle Stafford) apparently is displeased with seeing Willow with Michael somewhere. Willow asks Nina, “Are you accusing me of hitting on Michael?”

Meanwhile, on an airplane on the way to Paris, Maxie Jones (Kirsten Storms) is incredulous as she asks Peter August, “Do you know how hard it is to pack when you don’t know where you’re going?” General Hospital viewers have to wonder if he even gave her time to arrange childcare for baby James (the Marciano twins) or if he’s along on the trip!

Outside the front door of the Dawn of Day house, Sam McCall (Kelly Monaco) prepares to give Shiloh Archer (Coby Ryan McLaughlin) the phony pledge secret that Jason Morgan (Steve Burton) suggested she make about him, and that he would have Damian Spinelli (Bradford Anderson) put information on the Internet to back up. She tells him, “My pledge to you…..”

Can a new perspective help Kristina see the truth about DOD? Sonny and Alexis aren't ready for what they're about to hear. @MauriceBenard
An emotional, new #GH starts RIGHT NOW on ABC! @NancyLeeGrahn pic.twitter.com/04DaxxOlud

Meanwhile, a surprise stands outside the front door of the Corinthos safe house, as Kristina Corinthos-Davis (Lexi Ainsworth), her mother Alexis Davis (Nancy Lee Grahn) and Sonny Corinthos (Maurice Benard) are shocked when Dr. Neil Byrne (Joe Flanigan) opens the door and it’s Detective Harrison Chase (Josh Swickard)! He tells Kristina she was not an easy person to find! Will Kristina tell him she was kidnapped by her family, or will she say she just got back in town?

Finally, someone did just get back in town as Carly Corinthos (Laura Wright) asks Jasper Jacks (Ingo Rademacher) if he’ll be staying in Port Charles for a while!

Stay tuned to General Hospital and keep checking GH spoilers frequently for the latest news, updates, developments and new spoilers!  As always, more detailed spoilers and a full collection of pictures for the week in question will appear on Soap Opera Spy, where there will be more clues and hints over exactly what’s going on.