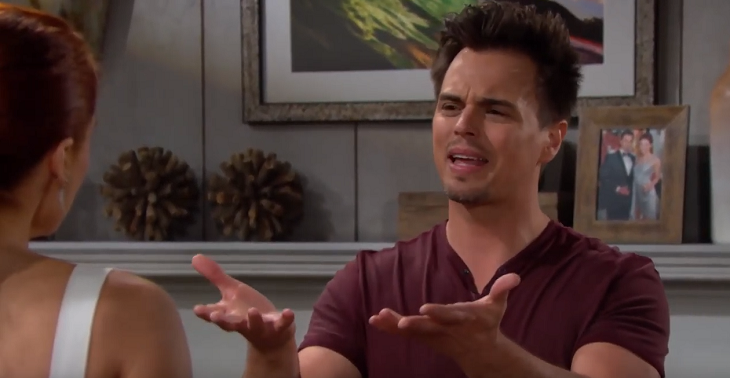 The Bold and the Beautiful (B&B) spoilers for Tuesday, May 7, tease that Thomas Forrester (Matthew Atkinson) will remain hopeful as he continues to pitch some big ideas to Hope Spencer (Annika Noelle). He’s just produced the engagement ring that he used to propose to Hope in Cabo years ago, and he’s hoping that Hope will at least consider a future with him and Douglas Forrester (Henry Joseph Samiri).

But according to B&B spoilers, Hope won’t be buying what Thomas is selling. She’ll again tell him that she’s a married woman and that what he’s doing by essentially proposing to her is inappropriate. She’ll promptly leave, while Thomas sits and dreams of Hope coming back and telling him that she’s reconsidered and that she’ll leave Liam Spencer (Scott Clifton) for him.

Meanwhile, on Tuesday’s episode of B&B, Sally Spectra (Courtney Hope) will make a bold move. She’s just come clean to Wyatt Spencer (Darin Brooks) about the secret she was keeping with Thomas. Wyatt was in utter disbelief to learn that Thomas was determined to go after Hope and destroy Hope and Liam’s marriage, and he was horrified to hear that Sally understood why Thomas was doing so.

From Wyatt’s perspective, Sally has completely dishonored Liam and Hope’s marriage, and Wyatt takes that personally. He’s very protective of his brother, and he won’t be able to live with the fact that Sally was willing to keep what Thomas was doing a secret from him, and from Liam.

The Bold and the Beautiful spoilers say that after arguing some more about the situation, Sally will remark that maybe she should just move out. Wyatt won’t disagree or try to talk her out of it, so Sally will pack her things, and “Wally” will officially come to an end.

Finally, on Tuesday’s episode of B&B, Brooke Forrester (Katherine Kelly Lang) and Ridge Forrester (Thorsten Kaye) will find themselves in familiar territory…arguing about their children. B&B viewers will remember that the two of them made a vow a while back to stay out of their children’s lives going forward, but it looks like that will be a hard vow to keep.

Given how close Hope and Brooke are, Hope will likely share with Brooke everything about Thomas’ kiss and his proposal that she leave Liam for him. Of course, this will enrage Brooke, who believes that Hope is best off with Liam. She’ll be angry with Thomas, and that could lead to some serious problems between her and Ridge.

As for Ridge, we’ll have to wait to see where he comes down. He may argue that they continue to stay out of the situation and let their children work out their problems. Or, he could agree with Thomas that Liam’s place is with Steffy Forrester (Jacqueline MacInnes Wood) and the girls. Either way, it doesn’t look like Brooke will appreciate his viewpoint, and an argument will ensue.

Be sure to tune in on Tuesday to catch up on everything happening on B&B right now. Check Hollywood Hiccups often for updates, news, rumors, and spoilers! As always, more detailed spoilers and a full collection of pictures for the week in question will appear on Soap Opera Spy, where there will be more clues and hints over exactly what’s going on.