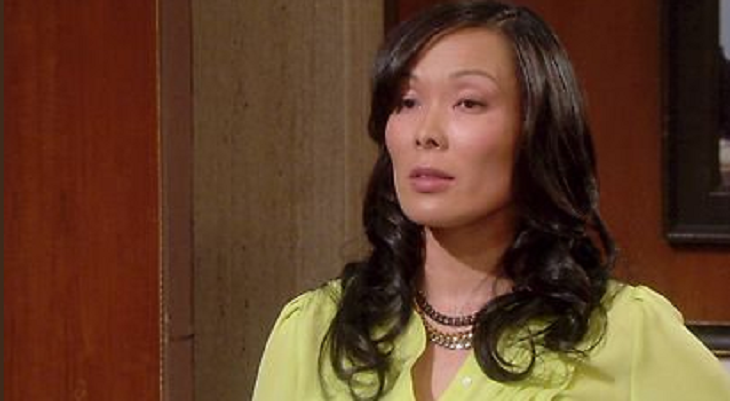 Days of Our Lives viewers have wondered if Melinda may really be Haley’s birth mother because of the difference in their ages; it is possible, but the fact remains that Haley was stillborn in China, not in the United States, and more likely before Melinda herself became a naturalized citizen; so even if the bombshell Melinda drops is that she’s Haley’s mother, not her sister, it still won’t keep Haley from being deported.

DOOL Spoilers– What Is Melinda’s Bombshell?

Haley would have had to have been born to Melinda in the United States for her to be an “anchor baby” or a “dreamer” or came with Melinda to the United States when Melinda herself emigrated and married Mr. Trask (uncast character). However, that is one possibility that fits Melinda pulling a fast one and it would be a bombshell!

Days Of Our Lives Spoilers: Hope Lashes Out At Eric For Not Protecting Holly-Claims He Broke His Promise To Her!

Given this takes place on Election Day, another scenario that might fit would be if Melinda put her name back on the mayoral ticket without telling the other two candidates, Jack Deveraux (Matthew Ashford) and Abe Carver (James Reynolds) and not actively campaigning.

Given the smear job that Jack did to Abe by showing a photograph he took secretly of Sheila Watkins (Tionne Watkins) kissing him, and he and Eve spinning it as sexual harassment, and JJ Deveraux (Casey Moss)retaliating by bringing up Jack’s rape in the 1980s of Kayla Johnson (Mary Beth Evans) publicly, Melinda may have realized she may still have a pretty good chance at winning and quietly put herself back in the running!

So will the fast one Melinda pulls pertain to Haley, or to the election? Will the bombshell be that she’s Haley’s birth mother, or that she put her name back on the mayoral ticket? Other Days of Our Lives spoilers do point to a surprising outcome of the election.