General Hospital Recap, Tuesday, May 7: Jax Is Back– Kristina Makes A Choice–Anna Is Sure She’s Peter’s Mother– Sam Commits To DoD 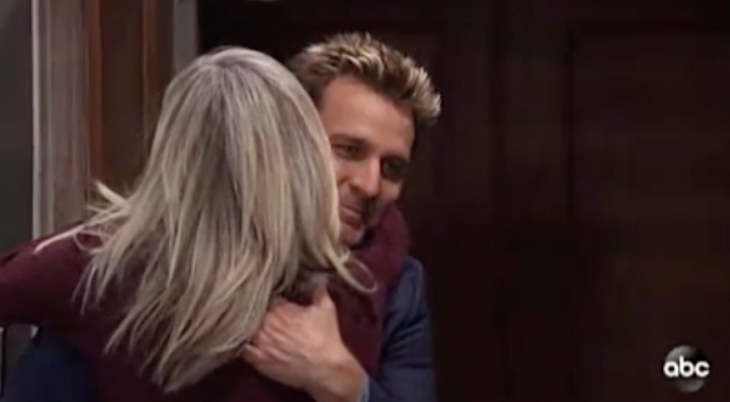 Welcome to your Tuesday, May 7 General Hospital recap! We begin our day at the Corinthos mansion, where Jasper Jacks (Ingo Rademacher) walks in the door and looks at a picture of Carly and Josslyn. Carly Corinthos (Laura Wright) calls out for Jason, but sees Jax and runs down the stairs into his arms.

At Kelly’s, Anna Devane (Finola Hughes) is staring into space, when Hamilton Finn (Michael Easton) asks her if something is wrong. She says she was talking to Robert Scorpio (Tristan Rogers) earlier and realizes that Peter August (Wes Ramsey) is not her son.

Peter August (Wes Ramsey) has booked a private plane for him and Maxie Scorpio (Kirsten Storms) to have a special date. Maxie asks where they are going and Peter gives her hints, they are going to Paris. They discuss some tourist destinations that they are going to go to. They realize they know some of the same restaurants.

Outside of Kelly’s, Micael Corinthos (Chad Duell) thanks Willow Tate (Katelyn MacMullen) for talking to Kristina Davis (Lexi Ainsworth) about Dawn of Day. Willow says it was all for a worthy cause. She says that opening up to Michael is much easier than anyone else.

Nina Reeves (Michelle Stafford) approaches and interrupts their conversation. Michael goes inside for coffee and Nina starts to attack Willow. Nina says she knows women like her – she needs attention, as she storms off.

At the safehouse, Dr. Neil Bern (Joe Flanigan) opens up the front door and says to Kristian Davis (Lexi Ainsworth) that she now has the choice to leave. Detective Hamilton Chase (Josh Swickard) is standing at the door and says she has been a touch person to find. Chase says that he and Valerie have been worried about her ever since they got the desperate phone call.

Kristina explains that everything is fine and she was just taking care of some personal business. Kristina tells her mom Alexis Davis (Nancy Lee Grahn) that she is going to move back home. Sonny Corinthos (Maurice Bernard) assures Kristina that she is now safe from Shiloh. 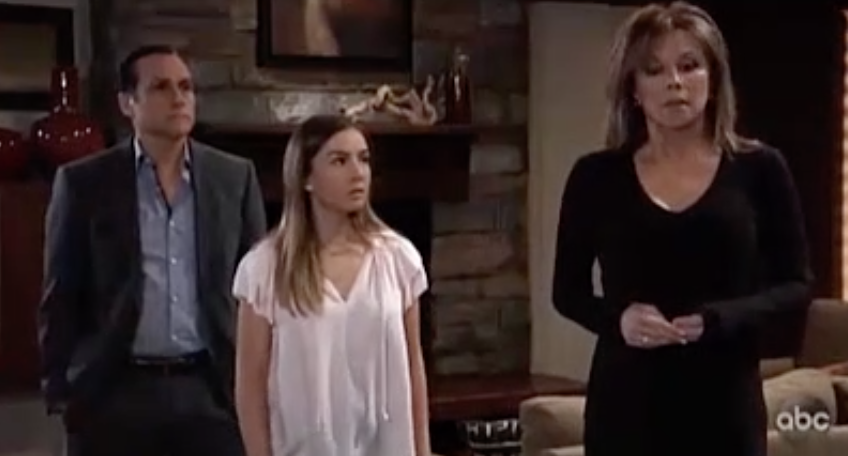 Sam McCall (Kelly Monaco) arrives at the Dawn of Day house where Shiloh Archer (Coby Ryan McLaughlin) greets her at the door. Sam reflects on how quiet the DOD house is and wonders where they all are. Shiloh says everyone is at a rally in Beecher’s Corner and so he can pay special attention to her. Shiloh says he’s going to transcribe a copy of the pledge for her to sign.

Shiloh sets up the initiation room with candles and offers her a drink, to calm her down. He is going to brand her with the Dawn of Day tattoo.

Anna Devane (Finola Hughes) tells Hamilton Finn (Michael Easton) that she is pretty sure that her sister Alex gave birth to Peter. Anna says she kind of feels sorry for Alex, enduring having the baby of a monster. Finn says that the memory transfer between Anna and Alex must have really worked well. Anna says she remembers all the specifics of having Peter but realizes they Area Alex’s memories.

General Hospital Spoilers– Jax Is Back!

Carly Corinthos (Laura Wright) and Jasper Jacks (Ingo Rademacher) reunite and discuss the hard time Josslyn (Eden McCoy) is going through. Carly says that she needs her dad more than ever, especially since Oscar Nero (Garren Stitt) has died.

Jacks asks Carly about the baby and when it’s due, Carly says the baby is due in October. Carly says she does not know how Josslyn feels about the new baby coming. Jason Morgan (Steve Burton) arrives at the mansion and says hello.

Anna is afraid to tell Peter the truth about his paternity, but Finn says there is no medical proof as of yet. Kristina thanks Sonny, Alexis, and Dr. Neil for helping her and doing the intervention.

Chase tells Michael he found Kristina and she is okay. Carly asks Jax if he is staying in Port Charles for a while, he says yes that’s the plan. At the DOD house, Shiloh begins the tattoo process on Sam – as Jason kicks the front door in …flash to preview