The Bold And The Beautiful Spoilers: Bridge Battle Over Hope– Brooke Learns Of Thomas’s Intentions 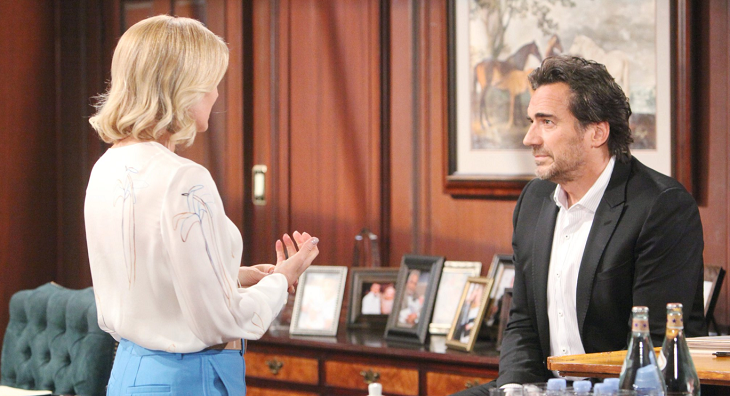 Brooke Logan-Forrester (Katherine Kelly Lang) and Ridge Forrester (Thorsten Kaye) love each other on The Bold and the Beautiful. They also love their children, which is creating the latest conflict in this fictional version of Los Angeles, California.

Lang’s character has long pushed for Hope Spencer (Annika Noelle) to be (or remain) with Liam Spencer (Scott Clifton). The seemingly tragic death of ‘Lope’s’ first-born child has only served to deepen Brooke’s belief that those two need each other.

Ridge was totally opposed to Liam leaving his daughter, Steffy Forrester (Jacqueline MacInnes Wood), in order to return to Hope. Liam actually only did so after being told by Steffy that it was best.

Life had been good since ‘Lope’ reunited. Of course, the apparent stillborn death of their daughter has tested Liam and Hope’s strength. But they romantically connected just prior to his leaving for Paris, France, which seemed to bode well for this couple.

Now, Ridge’s son, Thomas Forrester (Matthew Atkinson) has turned himself into a wedge issue. Wyatt Spencer (Darin Brooks) caught wind of what Thomas is trying to do and immediately told Liam, who was visiting Steffy and the girls, one of whom is Phoebe Forrester (Isabella de Armas and Redford Prindiville). The Phoebe-is-Beth reveal will follow, in the near future, devoted viewers are hoping.

Clearly, no one approves of Thomas’ tactics to try and marry Hope, which would also make her Douglas Forrester’s (Henry Joseph Samiri) official stepmother. But he believes that she’d be better off with him, while Liam should return to ‘Steam’, especially considering that Phoebe-Beth and Kelly Spencer (Zoe Pennington) need him.

BOLD Spoilers– Will Thomas’ Plan Drive A Wedge Between Bridge?

Brooke has no problem expressing her opinion to Ridge, or anyone else, about nearly any topic. She will follow suit, rightfully in this instance, in telling her husband that her stepson should back off his stepdaughter.

‘Bridge’ stands at a good spot in their most recent marriage. This most recent family strife likely won’t serve to split Brooke and Ridge, as both parents reentered their latest nuptials knowing that their combined backstories are complicated. However, dramatic days lie ahead, which drives the storyline to be compelling.