The Bold And The Beautiful Recap, Wednesday, May 8: Sally Lashes Out At Thomas– Hope Considers Thomas’ Proposal 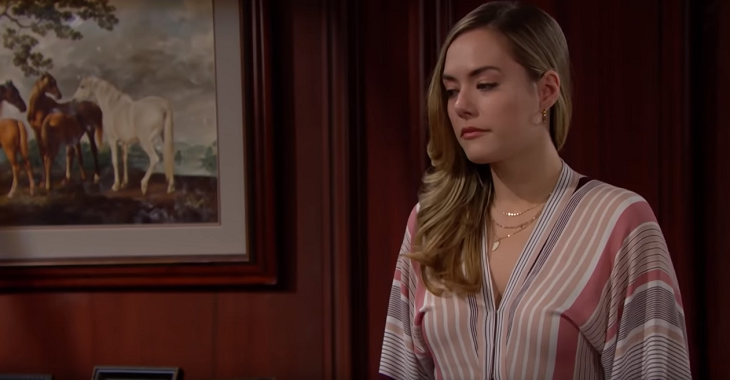 The Bold and the Beautiful (B&B) recap for Wednesday, May 8 finds Sally Spectra (Courtney Hope) blaming Thomas Forrester (Matthew Atkinson) for her break up with Wyatt Spencer (Darin Brooks). Also, Flo Fulton (Katrina Bowden) is taken aback when Hope Logan (Annika Noelle) confides in her while Quinn Forrester (Rena Sofer) can’t help but feel satisfied knowing that Wyatt and Sally are over.

It begins at Forrester Creations, where Hope is giving Flo a tour of the office. Flo says that she feels as though she’s going to love her new job as she can feel all of the creative energy already. Hope confides that going back to work hasn’t been easy for her. She’s still grieving her baby and can’t focus on her work. Flo gives her a hug. Hope then says that Liam Spencer (Scott Clifton) is coming home soon but that she feels guilty knowing that she is taking him away from his daughters.

B&B Spoilers– Hope Believe Thomas Is The Man For Her

Hope then continues to tell Flo that she feels a connection to Thomas and his son, Douglas Forrester (Henry Joseph Samiri). Hope tells Flo what Thomas has been telling her this entire time: that he has never really gotten over her and that he wants to start a new family with her. Hope thinks that this is her fate.

In the design office, a furious Sally confronts Thomas and blames him for her break up with Wyatt. Thomas can’t understand why she’s so upset. Sally thinks she’s been suckered in by Thomas and now she’s lost the one man in her life that she loved. Thomas can’t believe that Sally told Wyatt everything that he had previously confided in her. Sally defends herself and says that she loves Wyatt and couldn’t lie to him. Thomas yells at Sally and says he was wrong in trusting her.

Sally explains that at first Wyatt assumed that she was having an affair with Thomas and had to explain that it wasn’t the case at all. Sally then blames Thomas for even getting her involved in this mess to begin with. Thomas is now worried as he thinks that Wyatt might have told Liam about his plan to break up his marriage to Hope.

Quinn arrives at the beach house. She can’t hide her delight in hearing that Wyatt and Sally are officially over. Quinn is shocked that Sally would keep Thomas’ secret knowing that it would cause Wyatt and Liam so much pain. Quinn then brings up Flo and says that while he might not feel it right now, she’s the woman that he should be with. Quinn points out that Flo is much more truthful than Sally.