The Bold And The Beautiful Spoilers: Thursday, May 9 – Liam Returns And Faces Thomas – Flo Feels Like A Hypocrite 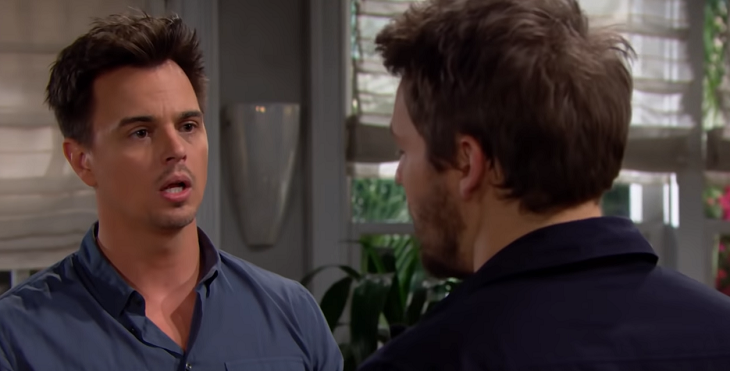 The Bold and the Beautiful (B&B) spoilers for Thursday, May 9, tease that Thomas Forrester (Matthew Atkinson) will be in for a big shock. He’s just learned from Sally Spectra (Courtney Hope) that she told Wyatt Spencer (Darin Brooks) all about his plot to break up Hope Spencer (Annika Noelle) and Liam Spencer’s (Scott Clifton) marriage.

Of course, Thomas quickly deduced that Wyatt likely told Liam about his plans for Hope, so Thomas is probably expecting some sort of blow-back from Liam at some point. But it doesn’t look like he’ll be expecting Liam to race home from Paris and get in his face. And according to B&B spoilers, that’s exactly what’s going to happen.

In fact, Liam got on the first plane back to Los Angeles. According to B&B spoilers, Liam’s first stop will be Forrester Creations, where he’ll check in on Hope. Liam will be concerned about Hope because he knows that Thomas likely played on all of her insecurities about their marriage while he was away.

Liam will be relieved to reunite with Hope and see for himself that she’s doing ok, but soon Thomas will walk into the room, probably looking for Hope. And that’s when Liam will unleash on Thomas. The Bold and the Beautiful spoilers say that Thomas will be stunned to see Liam there in person and that Liam will read him the riot act.

Meanwhile, on Thursday’s new episode of B&B, Wyatt will unknowingly cause some inner turmoil for Florence “Flo” Fulton (Katrina Bowden). Flo will visit with Wyatt and will learn all about his breakup with Sally. The news will probably give Flo some hope at first since she has never stopped loving Wyatt and would love to be in a relationship with him.

BOLD Spoilers– Flo Is Sitting On A Massive Secret

But soon she’ll hear something from Wyatt that will give her chills. She’ll hear that the reason for “Wally’s” breakup was that Sally kept a terrible secret from Wyatt. Flo will hear all about how Sally found out that Thomas was plotting to break up Hope and Liam’s marriage, but that she didn’t immediately tell Wyatt about it.

Of course, B&B viewers know that Flo is keeping an even more explosive secret than the one Sally kept. Flo knows that Reese Buckingham (Wayne Brady) kidnapped Hope and Liam’s daughter, then led them to believe that their daughter had died. Plus, Flo knows that “Phoebe Forrester” (Isabella de Armas and Rosalind Aune) is actually Hope and Liam’s daughter.

According to B&B spoilers, Flo will feel horrified and terribly guilty as she listens to Wyatt diss Sally about keeping a secret. Flo will feel like a hypocrite, and her guilt pangs over keeping her secret will start coming back in a big way. She’ll know that if her secret ever comes out, Wyatt will reject her, too.