The Young And The Restless Spoilers: No More Baby For Mama Mia! Does Her Arrest Cause A Miscarriage? 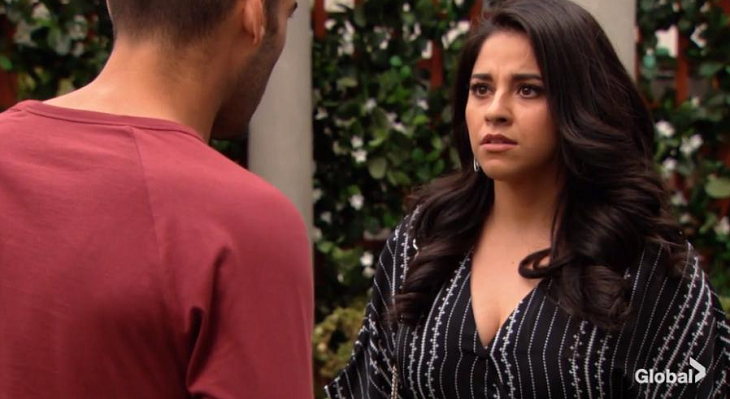 The Young and the Restless (Y&R) spoilers tease that trouble is headed Mia Rosales’ (Noemi Gonzalez) way in the next couple of days.  The often misunderstood woman is expecting a child, but she isn’t quite sure who the daddy is. She slept with both her husband, Rey Rosales (Jordi Vilasuso) and his brother, Arturo Rosales (Jason Canela).

And, if her problems aren’t bad enough, Lola Rosales (Sasha Calle) will find out that she was the one who shoved her in the icy pool that night that almost cost her life.  Before the week is over, Paul Williams (Doug Davidson) will arrest her and she could lose her unborn child by miscarriage.  Here’s what’s coming up on Y&R.

On Thursday’s episode, Lola will put it all together and learn that Mia was the one who pushed her in the pool that night.  Y&R spoilers say Lola will figure out because she will remember wearing Abby Newman’s (Melissa Ordway) coat.  Of course, Mia will not be able to deny it but will beg her sister in law to keep quiet.

The Young And The Restless Spoilers: Paul Cracks Lola’s Attack Case– Mia Is Arrested — Beginning Of Her Exit Storyline

Arturo will approach Lola too.  He will beg her to stay quiet about the incident. They will decide that jail isn’t a place for a pregnant woman. However, Arturo said that if the baby she’s pregnant with turns out to not be his kid, he will turn her into the police himself!

On Friday’s episode, Paul will show up at the hotel and place her under arrest.  Y&R spoilers say Mia will cry and get so upset something happens to her baby.  The preview for next week said. ” No more baby for Mama Mia.”  Many of the viewers took that to imply that Mia will get so stressed she may have a miscarriage.

There is also the possibility that the spoiler could mean Mia will be sent away to prison.  Gonzalez’s days are numbered as her last day as Mia is quickly approaching.

Do you think Mia will lose her baby?  Will she go to prison or off to Miami with Arturo?  Don’t forget to come back later for more The Young and the Restless (Y&R) spoilers, news, and casting updates!