Days Of Our Lives Spoilers: Xander Drops A Shocker To Brady– Does He Reveal His Marriage To Nicole? 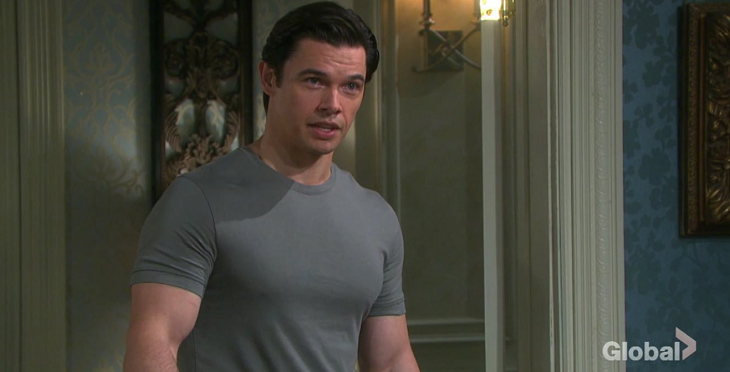 Days of Our Lives (DOOL) spoilers tease that Xander Cook Kiriakis (Paul Telfer) will make a surprising announcement to Brady Black (Eric Martsolf) this week. As Days of Our Lives viewers know, Xander is a sneaky one; but he seems to have sunk to a new low with the kidnapping and what appears to be black market adoption of Holly Jonas (Scarlett and Harlow Mallory!)

What could he possibly be approaching Brady about that Brady would find a surprising announcement; it wouldn’t seem that anything Xander could come up with would be surprising!

DOOL Spoilers– Will Xander Tell Brady About His Marriage?

Other Days of Our Lives spoilers tease that Xander will find Brady comforting Nicole Walker (Arianne Zucker) over Holly, and Xander won’t much like what he sees. Nicole mentioned in a recent Days of Our Lives episode that she had married Xander but only out of blackmail. The fact is, the marriage was legal and even though Eric Brady (Greg Vaughan) knows about it, maybe Brady doesn’t, and Xander wants to make sure he does!

Xander may want to hold Nicole’s marriage to himself over her as some kind of leverage, although it doesn’t seem to make a lot of sense. He’s delivered Holly to “her new home” as he told Ted Laurent (Gilles Marini) and Nicole, and the rest of the Salemites excepting Ted believe she died in the van explosion, as well as her kidnapper!

DAYS Spoilers– Does Kristen Have Holly?

Other Days of Our Lives spoilers tease that Kristen DiMera (Stacy Haiduk) may be the person who Xander delivered Holly to, as she has kidnapped babies before and even stole an embryo that wasn’t hers implanted in herself! Xander and Kristen have been partners in crime before, so if that’s where Holly is, that would be no surprise to Days of Our Lives viewers!

In the latest #DAYS, the search for Holly takes a tragic turn. https://t.co/ZsCmioRrzb pic.twitter.com/qvDljVpvzU

Days of Our Lives spoilers tease that Stacy Haiduk is to return as Kristen, although no airdate has yet been announced for her arrival. Brady was also romantically involved with Kristen a few times, so Xander’s announcement could either be about staying away from his wife, Nicole, or something about Kristen being alive!