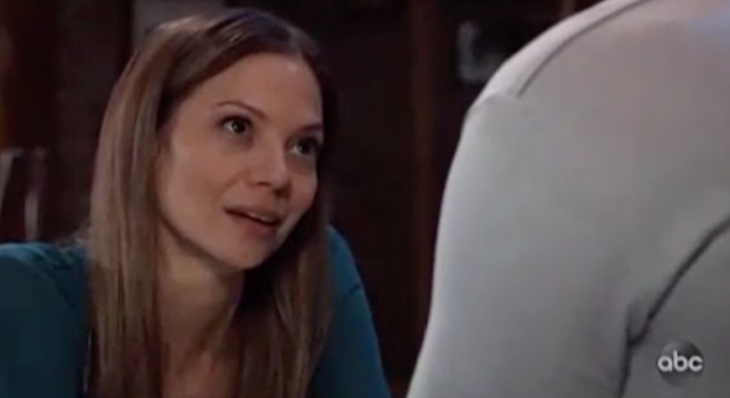 Welcome to your Thursday, May 9 General Hospital recap! We begin our day at the Quartermaine mansion where Sam McCall (Kelly Monaco) and Jason Morgan (Steve Burton) are discussing that Leo and Danny are out playing in the yard. Jason Morgan asks Sam McCall how she is doing after Dawn of Day the previous evening. At Alexis Davis’s (Nancy Lee Grahn) house, she and Kristina Davis (Lexi Ainsworth) are having breakfast together.

At Charlie’s Pub, Kim Nero (Tamara Braun) is being comforted by Julian Jerome (William DeVry). She is mourning the death of her son Oscar Nero (Garren Stitt.) At Harrison Chase’s (Josh Swickard) house, he is getting up as Willow Tate (Katelyn MacMullen) has a cup of coffee. He asks how she is and she says she’s feeling anxious about Willey and Dawn of Day.

At the Dawn of Day house, Brad Cooper (Parry Shen) is getting a relaxing head massage from Shiloh Archer (Coby Ryan McLaughlin). Brad says that he feels much better, but he’s worried about Wiley’s birth mother getting too close. Brad explains that the birth mother keeps showing up all over town wherever he is. Shiloh says Brad should bring her to him, maybe Dawn of Day can help her.

At Kelly’s, Mike (Max Gail) is confused by what they are celebrating, he thinks it’s because Michael Corinthos (Chad Duell) is about to become a father. Michael explains that his baby died but his father Sonny is going to have a baby. Mike says he’s excited to become a grandfather again.

Michael leaves to go see Kristina and Mike asks what is wrong with her. Mike explains that he is sorry about Michael losing his baby and he reminisces about Courtney dying.

At General Hospital, Anna Devane (Finola Hughes) brings Hamilton Finn (Michael Easton) coffee and appreciates his feedback. She feels better about the fact that Peter August (Wes Ramsey) is not her son. Suddenly Robert Scorpio (Tristan Rogers) enters and says he thinks he has a way of finding out if Alex Devane (Finola Hughes) is Peter’s mother. Robert says he has hunted down Demetri Marek (Haven’t heard that name since All My Children days.)

Kristian Davis (Lex Ainsworth) asks if there are any rules that she needs to follow while living at home. Alexis says she needs to trust her and she’s not allowed to see anyone from Dawn of Day. Michael shows up to check on Kristina and see how she’s doing.

At Charlie’s place, Lucas Spencer (Ryan Carnes) shows up to talk to his dad Julian Jerome (William DeVry). Lucas tells Kim how sorry he is for her loss as she heads out. Lucas says he needs to talk to him about Brad, something is going on. Lucas asks Julian if he has any idea what may be going with Brad since they spend a lot of time together. Lucas says “tell me what the hell is going on with Brad.”

Willow freaks out about Wiley getting too close to Shiloh, he can never know her secret. Chase says that she can never tell Shiloh about Wiley as it could lead to legal problems.

Kim goes to the Dawn of Day house and thanks him for all that he did. Shiloh says that she should not think of Oscar as being gone, just in another realm. Kim talks to Shiloh about Oscar’s last days and he comforts her. Jason tells Sam that she’s off the hook in terms of Shiloh.

Anna's made up her mind where it comes to her son, but Robert thinks he can figure out whether she or Alex is Peter's biological mother.
Tune into a tense, new #GH – STARTING NOW on ABC! @finolahughes pic.twitter.com/eAiyul3UdK

At the Dawn of Day house, Kim and Shiloh discuss Oscar and Drew. At the hospital, Robert tells Anna that Peter is as evil as his father Faison. Anna says no matter what she wants to have a relationship with Peter. Sonny runs into Robert and asks him to deprogram Dante, Robert says that may not be so easy.

Shiloh goes to leave the DOD house and Kristina is standing at his door. Sam tells Jason that she needs to finish the initiation and they are going to need to record it. …flash to preview