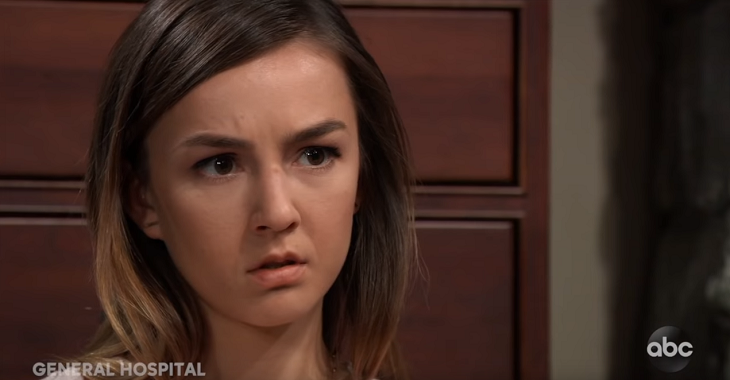 General Hospital (GH) spoilers for Friday, May 10 tease another day of drama and unanswered questions for the viewers! First, Maxie Jones (Kirsten Storms) and Peter August (Wes Ramsey) are in Paris, France on their first, over the top, romantic date! Maxie is telling Peter she is having the best time, and General Hospital viewers can be sure that she is! Not very many first dates are overseas and involving a private plane!

Next, at General Hospital, we see TJ Ashford (Tajh Bellow) sitting on his mother, Jordan Ashford (Briana Nicole Henry)’s hospital bed. He obviously wants to know where Curtis Ashford (Donnell Turner) is, and why he’s not there with Jordan. Jordan tells him he’s looking for Ryan Chamberlain (Jon Lindstrom).

Somewhere in Canada, Curtis and Laura Collins (Genie Francis), who decided to go with Curtis on the search are in a restaurant. They are obviously talking about Ryan Chamberlain and the people back in Port Charles who might be in danger. Laura tells Curtis “We need to find Ryan before he finds them”! Will they be able to find him before he shows up in Port Charles, or is he already a step or two ahead of them like he always is?

General Hospital Spoilers: Sonny Makes A Shocking Announcement — Is He Teaming Up With Jax?

Back in Port Charles, at Charlie’s Pub, Ava Jerome (Maura West) is sitting at a table with Kevin Collins (Jon Lindstrom) She is insistent that they need to get rid of Ryan once and for all, and she’s really mad! But is she really with Kevin – or has Ryan shown up already?

Kevin just found out he’s a kidney donor match for Jordan Ashford, has he even mentioned this to Ava? They might have to postpone their plans if he’s going to donate that kidney, and General Hospital viewers can’t imagine Kevin turning down a chance to help Jordan! But then, maybe that’s what Ava’s mad about and wants him to postpone the donation until Ryan is taken down!

Kristina's finally home, West Coast. But what will her life look like, post-DOD? #GH is brand-new and STARTS NOW on ABC! @_lexiainsworth pic.twitter.com/6RqYryTHny

Dr. Neil Byrne (Joe Flanigan) is with Sonny Corinthos (Maurice Benard) talking about Kristina Corinthos-Davis (Lexi Ainsworth). Sonny is doubtful about letting Kristina have the freedom to make her own decisions, and Neil tells him to trust his daughter and let her go!

Meanwhile, Kristina is gone! She went to the Dawn of Day house and is asking Shiloh Archer (Coby Ryan McLaughlin) for her pledge back! She will soon find out it doesn’t work like that more than likely!

Stay tuned to General Hospital and keep checking GH spoilers frequently for all the latest news, updates, developments and new spoilers! As always, more detailed spoilers and a full collection of pictures for the week in question will appear on Soap Opera Spy, where there will be more clues and hints over exactly what’s going on.