The Bold And The Beautiful Spoilers: Friday, May 10 – Liam Spars With Thomas Over Hope – Quinn And Sally Face Off 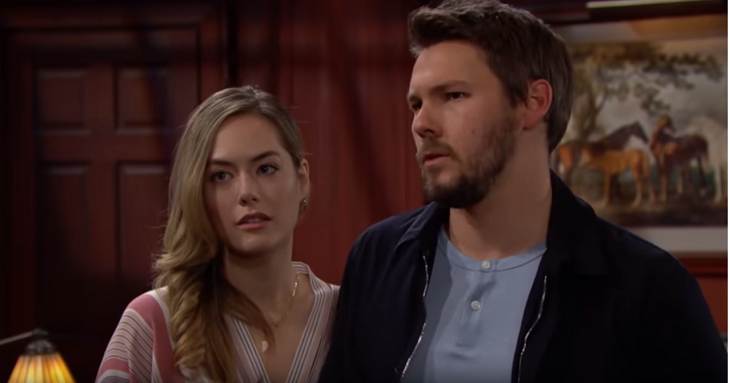 The Bold and the Beautiful (B&B) spoilers for Friday, May 10, tease that Thomas Forrester (Matthew Atkinson) will be stunned. He’s just received an earful from Liam Spencer (Scott Clifton), who has rushed home from Paris because Thomas was making moves on Hope Spencer (Annika Noelle). Liam’s there to set the record straight and let Thomas know that his behavior has been unacceptable and that it’s going to stop.

As B&B viewers know, Thomas believes that Liam should be with Steffy Forrester (Jacqueline MacInnes Wood) and be a full-time dad to Kelly Spencer (Chloe Teperman and Zoe Pennington) and Phoebe Forrester (Isabella de Armas and Rosalind Aune). And Thomas wants Hope to be with him and come together as a family with Douglas Forrester (Henry Joseph Samiri).

But Liam will be having none of Thomas’ theories about who should be with whom. Liam will let Thomas have it and will totally blast him for trying to play God with other people’s marriages. According to B&B spoilers, Thomas will be shocked by Liam’s strong reaction – perhaps he didn’t think Liam had it in him. But at the end of the argument, it will be abundantly clear that Liam expects Thomas to back off.

Meanwhile, on Friday’s episode of B&B, Quinn Forrester (Rena Sofer) just won’t be able to keep her joy over Wyatt Spencer (Darin Brooks) and Sally Spectra’s (Courtney Hope) breakup to herself. She’ll run into Sally, and she have to rub salt in Sally’s wounds.

Of course, Sally feels terribly guilty for keeping Thomas’ secret from Wyatt, and Quinn will make her feel even worse about it.

The Bold and the Beautiful spoilers say that Quinn will start things and that Sally and Quinn will have a major blowout. Of course, B&B viewers know that Quinn wants nothing more than for Wyatt to embark on a relationship with Florence “Flo” Fulton (Katrina Bowden), and Sally knows it, so the two may spar over that as well as about Sally’s big secret from Wyatt.

At any rate, look for a big showdown between the ladies. Chances are, Sally won’t come out victorious in this argument since she knows that she did wrong by Wyatt. But she’ll probably get a few good digs in against meddling Quinn, so it should be interesting to watch.

Be sure to tune in on Friday to catch up on everything happening on B&B right now. Check Hollywood Hiccups often for updates, news, rumors, and spoilers! As always, more detailed spoilers and a full collection of pictures for the week in question will appear on Soap Opera Spy, where there will be more clues and hints over exactly what’s going on.