The Young And The Restless Spoilers: Friday, May 10 – Sharon Sees Adam – Mia’s Rushed To The Hospital – Phyllis Makes A Pitch To Ashley 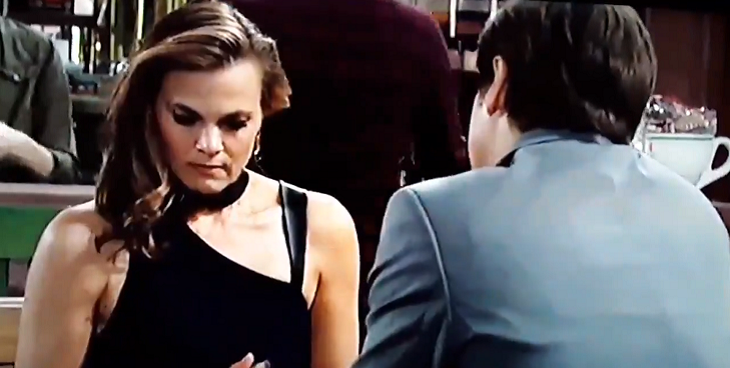 Sharon and Victor Newman (Eric Braeden) will talk about plans for getting through to Adam Newman (Mark Grossman), and Victor will want to help, but Sharon will convince him to let her handle it. Then Adam will text Sharon with a meeting locale.

Next on Y&R, at Society, Lola and Arturo Rosales (Jason Canela) will discuss the Mia situation, and Lola will agree not to go to the cops for the sake of Mia’s baby. Abby will make the same agreement as Rey arrives. Rey will tell a heartbroken Lola that he knew her attacker was Mia. Meanwhile, Arturo will ask Abby to lie if the police start asking questions about Mia’s alibi.

The Young And The Restless Poll: Mia’s Genoa City Run Ending – Will She Leave GC Or Go To Jail? Vote Now!

At Crimson Lights, Summer Newman (Hunter King) will inform Kyle Abbott (Michael Mealor) that “Theo” the social media influencer (Tyler Johnson) is on his way with another influencer. Summer will then chat with Phyllis Summers (Gina Tognoni) on the patio and confront her about hacking into her Jabot files. Summer will tell Phyllis to move on and forget about Jabot.

Next on Y&R, Mia will have a nightmare of Paul Williams (Doug Davidson) arresting her for attempted murder, and she’ll subsequently pack her bags. But then Paul will arrive for real and question her about the assault. Mia will eventually admit to everything, then clutch her stomach and cry out in pain.

At Jabot, Summer and Kyle will meet with Theo and his influencer Nazanin Mandi Pimental (playing herself). They’ll head to Society, and Kyle will tell everyone that his girlfriend is the chef. Elsewhere in the restaurant, Arturo will tell Rey that he was the one who told Lola that Mia was her attacker.

Later, the influencers, Kyle, and Summer will head to a club, while Arturo and Abby have another talk. Abby will tell Arturo that if the cops come to her about Mia, she won’t lie for him. Then Rey will get a call from Paul that Mia’s at the hospital and Kyle will return from the club to be with Lola.

Next on Y&R, Phyllis will call Ashley Abbott (Eileen Davidson) from her hotel room with a business proposition.

Y&R Spoilers– Sharon Sees Adam, ‘It Is You’

Back in Las Vegas, Sharon will arrive at a door, and Riza Thompson (Tina Casciani) will answer. She’ll tell Sharon that “Spider” is delayed and wish her luck before leaving. Sharon will snoop in the trash and find photos of Adam’s family inside, then she’ll snoop in a drawer and notice a photo of Christian Newman (Jamie and Alister Tobias).

Finally, on Friday’s episode of Y&R, the door will open and close. Sharon will turn around and say, “Oh my God, it is you.”

Be sure to tune in on Friday to catch up on everything happening on Y&R right now. Check Hollywood Hiccups often for updates, news, rumors, and spoilers! And as always, don’t forget to check back with Hollywood Hiccups for all the latest news, updates and spoilers on The Young and the Restless (Y&R)and all of your favorite daytime television shows right here!